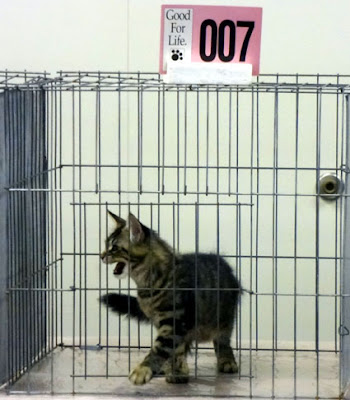 I went to a cat show today, first time in my life. It suddenly appeared to me that every cat is a winner. There's no real distinction between them like you see at dog shows.

The judges spent a minute or so feeling each cat, checking it over to make sure everything was in place, then promptly awarded each one a first place ribbon and other awards. I say each one got first place. I don't know if that was literally true, but it was virtually true. That is, I didn't see one that wasn't first place.

The aspects of actual competition were to be found between two or more cats of the same breed and/or color. But if a cat was white and there weren't any other white cats, that one was automatically first in color. Or if there was one example of a particular breed, that one was automatically best in breed. It was only in the unfortunate cases where there were two cats of a breed or color where the poor dears had to worry about getting second. But each one had a first place ribbon, apparently just for showing up, to soothe its feelings.

There was some definite ribbon inflation going on! How satisfying that must be for an owner to go home and say "Tabby took first place," then neglecting to mention that all the others were first, too!

And these cats really didn't have to do anything. Just let the judge feel them and that was it. There was one cat, when the judge went and picked him up, he let out a loud "ROWL," like he was upset. The judge flinched but set him on the table, at which point he let out another loud "ROWL." The judge instantly scooped him up and put him back in the cage, saying to the folks gathered, "I'm not that brave." Then he went over and put the first place ribbon on the cage. This started and ended within 20 seconds.

But think of how it is at dog shows. Dogs are working their hearts out to get a little recognition. The owners are running them around the ring. They're pushing at their feet to keep them straight. The owners are sweating bullets that the dog might move a muscle. They've got a piece of food at the ready for a reward. Then you have an arena full of dogs and basically one gets the award, or the top three.

It pays to be born a cat. You don't do anything and you're Number One!
Posted by dbkundalini at 7:19 PM