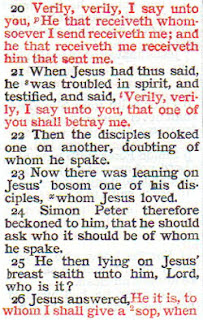 I've been looking at The Good Book lately and noticed something very interesting, that Jesus talked in red.

Whenever an ordinary person is talking it's in normal everyday black, like most of us speak, but whenever Jesus says something, it's red. Making me wonder, How could anyone not see he was divine? At least red-speaking isn't normal where I come from.

And no one can say it's just because He was from Israel and Bible times, since obviously the others in the Bible spoke black just like us. It's only this one person who's going around everywhere talking red.

Was he a show-off? When he was in school was he talking red? That'd be very different. You're a kid in kindergarten, and every kid takes for granted that the other kids are going to talk black, then you have this other kid talking red. I actually think I'd personally be somewhat attracted to a red speaker, now that I think of it. Because he's going to be the odd man out, which some of my favorite people are.

I can imagine it might do him some good. We're all up there reciting our little memory pieces, like the Gettysburg Address. And I know Jesus is coming up after me, so I'm stretching my voice as best as I can, going for an extra lilt, trying to dainty it up the best way I can, trying to make it red -- and he's sitting there, merciful but about to show me up. Of course the teacher knows I'm a black talker and writes me up for trying to be something I'm not.

Then he's out sweet talking the girls, to the discomfort of us other boys. Or maybe he's talking red to some of the other boys, to the discomfort of the girls and to a few of the boys who are bullies. Think of how attractive that might be, a beautiful kid with long hair and the first snippets of a beard, and a very holy look, coming on to you in red. You lay back like, "Calgon, take me away!"

Then he grows up. He's working in his father's carpentry business, pounding boards and making dog houses, all of them affected in some unusual way by the same source it is that makes him talk red. Lots of trellises, ornate shutters, working chimneys, a guest room for out of town dogs. Everything he touches basically explodes in some kind of divine profusion. It's not unusual at all that he might be able to speak things into existence, his word being unique, red.

Jesus finally hitchhikes to Jerusalem to die. Pilate says, "You talk in an unusual color." Jesus replies, "My voice is not of this world. My sheep hear my voice. It's red."
Posted by dbkundalini at 12:28 PM

I wish he talked in black, I find the red harder to read.