Kind Words For Grandma In The Hospital 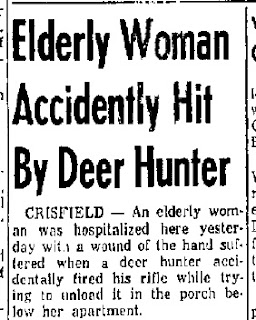 Google lists for me the search words that bring people to my blog. It's always interesting. Today someone visited after searching for the phrase "kind words to say to someone's grandma in the hospital."

I don't really know what page they landed on with those search words. But it's important to me to cater to whatever people want, so I thought I should work up some "kind words," just in case they're still looking for something to say.

Of course grandmas end up in the hospital for lots of different reasons. There's a sudden stroke or heart attack, those are pretty common. Or they fall down the stairs. Or step on something sharp in the yard and cut themselves. Really, there's no telling what all can happen.

Still, whatever the situation, there are plenty of kind things you can say when they're in the hospital. And it definitely pays to be prepared. I myself know how tough it'd be just to show up at the hospital cold, without having practiced a few carefully prepared remarks. I might even take a printout of something I saw on a blog.

I can think of a few things you might say in basically any situation. Such as, "I'm sorry to hear about the trouble you've had. It's really too bad it had to happen. And I hope you get better very soon." She'll appreciate that. One, you've recognized it as an unfortunate set of circumstances; two, you've shared your sympathy; and, three, you've expressed a good hope for the future. But let's say you weren't prepared. You might've gone in blustering forth with something very embarrassing, such as, "These things happen. Maybe watch out next time, if somehow you manage to pull through." That's awful!

If it's a terrible illness or disease, you might say, "I hope you keep a good outlook on things. They're working miracles everyday. And I have a real good feeling about this." Actually, to me that's borderline bad. First, it seems like you're borderline doubtful that she'll have a good outlook. Second, mentioning miracles seems to put her recovery potentially out of reach. And third, to say you have "a real good feeling" seems like false hope on the face of it, because who are you? What's your track record when it comes to "good feelings" in past cases? So if you're going to use that one, tweak it for your own circumstances.

You can see by the newspaper illustration that I'm looking at a very specific case. A guy had been out deer hunting, then walked on to the porch of a store. He was trying to unload his .30 caliber rifle when it accidentally discharged, the bullet passing through the side of the building and going through the floor of the woman's apartment, then through the arm of her rocking chair, where she was sitting writing a letter. She ended up having the end of her left ring finger amputated and another finger on that hand cut.

So, let's say you know someone this happened to. And you're going to the hospital and want to say some kind words to her. You might say, "My God, how terrible! I can only imagine! What a shock! You wouldn't expect that in a million years!" Look what you've done. You're immediately on her side, because no doubt she's had a lot of frantic thoughts like that too. She sees you're a kindred spirit.

But it goes without saying that your entire visit can't be these shocked phrases, because if you say much more like that it's going to appear artificial. So at some point, I would just look at her with silence and a look of sympathy, and maybe let out a big breath, as if to say, "So where do you go from here?" But you're not saying it; it's silent and implied. Maybe shake your head, and be careful to keep eye contact. Now you're going to speak slowly and with calmness, something like, "You've been through so much ... now it's your time to heal."

If she then holds up her hand and draws attention to the missing finger, of course both of you know that's not going to heal. So there's not much more you can say about it, frankly. I'd just say, "You need to heal as best you can..." And maybe shake your head again in sympathy. Then as the sweat forms on your brow, check your watch, remember an appointment, and say your goodbyes.