Our Greatest Presidents: Washington And Lincoln 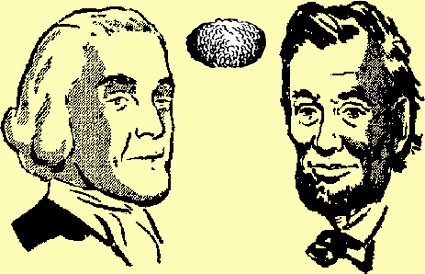 George Washington (left) was our first president, so for his term in office he was literally beyond compare. And somehow he's been able to maintain that incomparable standing, even though he's had numerous successors. None of them, except Abraham Lincoln (right) has been able to hold a candle to him.

Washington's time in office was back in the earliest days of the American nation. Despite every disadvantage, he led the pack and never looked back. There wasn't anything to look back on. Everything he did, he had to invent. If anything, he looked forward, to the time when Lincoln would be born.

1732 is the date we learned in school when Washington was born. And it wasn't quite a hundred years, in 1809, that Lincoln was finally born.

Lincoln came into the world at just the right time, the time the nation needed him most, so he could help get rid of slavery. Why we ever needed slaves, and why we didn't simply outsource our cotton picking to China, I don't know. Because our ideal is the freedom of every man, not their enslavement. The biggest question of Lincoln's century was "Go figure."

Notwithstanding our ideals, we needed someone to lead the way toward realizing them. And the man for that task was Abraham Lincoln, who grew up just in time to get the job done. He led us through our bloodiest Civil War to date.

Both of our greatest presidents were true brains. A brain is pictured between them, representing their great intelligence.
Posted by dbkundalini at 11:00 AM