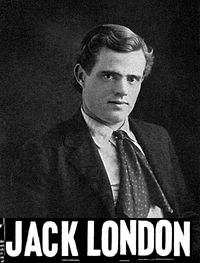 I haven't known Jack. Jack London was among my nemeses in school, since we were supposed to read his book "The Call of the Wild" and I never managed to get it done. I started it probably 50 times that summer in the late '60s, but my own Call of the Wild (playing in the neighborhood, goofing off, and love of summer activities) was too great.

Fortunately, and a bit of luck I wasn't expecting, they never said anything about it when we got back to school. So I wasn't penalized for my failure, except to the extent that I tortured myself worrying about it. The other book we were supposed to read, and supposedly were going to have to answer for, was "Shane," and I haven't read it either.

I think it in 2009 that I picked up "Call of the Wild" again and started it, and that time I got quite a ways, all the way up to the part where the dog is up in the Arctic somewhere and fighting for its life. It seems like they've got food buried and the dogs are trying to get it. I forget. I still haven't made it all the way ... but any day now it could happen, since now I also have it on my Kindle.

I have a little difficulty with the premise, that the book is told from the dog's point of view. We're used to that with Disney movies, the animals living their very human dramas, but when its the nitty-gritty world of a dog reverting back to its wolf nature, it's a little different. But from the sound of things, people were captivated by it in the early 1900s.

Anyway, like I said, I didn't really know anything about Jack London all these years. I probably read whatever blurb about him they had in the '60s paperback, but whatever I may have read I forgot. But the other day I was at the library, and having just read a Jack London book, "Cruise of the Dazzler," I went and got the biographies they have, and leafed through them.

Just in the half hour I spent looking through the biographies, I learned more about Jack London than a guy probably needs to know. He had serious troubles with alcohol and wrote a book on it that I guess was supportive of Prohibition, "John Barleycorn." I started reading this non-fiction book of his own drinking experiences today. I'm finding it a little turgid (would that be the word?) and not entirely to my liking. I might need a stiff drink before I continue.

In one place he talks about taking his father a bucket of beer, out to the field. And on the way, as a 5-year-old, he gets drunk. I think I've seen something like this in a movie, someone drinking a bucket of beer. I've never had a bucket of beer! I'm up to the place where a bunch of guys in a nightclub make him -- I think he's 7-years-old by now -- get wasted on wine. The first thing I can say about that, his childhood was totally different from mine. We never had alcoholic beverages on the premises, it just didn't happen.

As for writing, he wrote a lot, and some of it is really good and some of it isn't. Because he was writing more or less for quick bucks and was churning it out. I wouldn't mind doing that, if anyone out there wants to pay me by the word, I could sit here for hours just hacking away, blah blah blah. Among the things that are the best, we have "Sea Wolf," "White Fang," a few other things that escape my memory, and "Call of the Wild." Which is interesting in the last case, because he sold "Call of the Wild" outright for a $2,000 pittance and could've become filthy rich from that one book alone.

Among the other nuggets gleaned from the bios, there are unpublished nude photos of Jack London out there. I should look online -- I haven't yet. It's kind of tough to believe that Jack London's 100-year-old nude photos could escape publication but Anthony Weiner's were out there before the proofs dried. Jack's second wife Charmian had the nude photos on the wall. She was reportedly very randy, that is sexually, but his first wife, Bess, couldn't stand "the act." One of the bios suggested he had some homosexual leanings. I'd love to read a book on this subject alone, but they just gave us enough to pique our interest.

And here's something I didn't know, that Jack's death was questionable and has been something of a mystery all these years. I'm just reporting what I read, that the older bios and people on the scene at the time thought it was suicide. But in more modern times, they're thinking it was probably just him trying to kill pain and he overdid it (morphine.) That sounds more credible to me, although my knowledge of the circumstances is admittedly limited to five minutes perusing the issue in these bios. It sounds like a good "Cold Case" to reopen, and maybe get the "Ghost Hunters" from TV on it.

So what's my bottom line on Jack London? He seems fairly cool, a guy worth checking out, and maybe you should read a thing or two by him.
Posted by dbkundalini at 7:11 PM