Cheated Out Of Being A Musical Prodigy 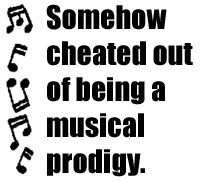 As I said yesterday, I'm on a road trip, which involved going to a different state to see family.

Among my family is one of those nieces I haven't seen very often. I saw her when she was first born, in her crib. Then a few other times over the years in her home when she was bigger but still definitely a child. Then at Christmas several times for minutes at a time. She was at the kids' table, then off to play with the other kids, while we adults sat around. And a few other times. She's the first person I ever saw who had an iPod Touch.

Anyway, the years since the time she was in the crib and now that she's getting ready to go to college have been bridged, just like that. And somehow, I don't know how, she became something of a musical prodigy, proficient and comfortable at instruments, and conversant in the finer points of musical knowledge. One of the lessons is, if you think you're smarter than a kid, just wait till they grow up and show you. I'm very impressed.

So she has definite plans. She practices all the time. She studies in a remarkable way, good enough to end high school with a 4.0 GPA, and, in short, she's everything I never was ... but let's face it, probably should've been. Enough about her, let's talk about me.

I really should have been a musical prodigy. I got a guitar way back when, 1969, and I suppose I could have really mastered it, if only things had worked out differently. I don't really remember what got in my way, but it must have been something. Then I got a second guitar around 1970, then my present guitar in 1972. My first guitar was a piece of crap. My second guitar, I cut holes in it, after the logic that if one hole made a nice sound, a bunch of holes would be better.. But all in all, I never really got that good at the guitar. I certainly wasn't studying it in a systematic way, being generally content with knowing a few chords and being able to hit a few bass notes. I rose to a pinnacle just below mediocrity and stayed there.

I actually composed songs for a while way back when. And I thought they were pretty good, although none of them ever made it big. The best I can say, my four walls enjoyed what they heard, and they still have the peeled paint to prove it. This is actually true, and I might have mentioned it, but one of my songs was called "I Get Weak." It was a coincidence that a couple years later Belinda Carlisle came out with a song with the same title. So obviously I was on the right track as far as titles went. The theme of the song was the weakness I felt whenever my beloved was near. I can remember I rhymed the "her bed springs squeak" with "I get weak."

One of my songs, unfortunately, contained a serious error, which I didn't realize till it was done. I confused the words "stigma" and "stigmatism." The title of the song was "I Have A Stigma On My Eye." I don't remember the other words to the song, but later I realized it should have been "I Have A Stigmatism On My Eye." I've had several stigmas attached to me through other issues, but to say I had one on my eye turned out to be inaccurate. (In truth, I never had a stigmatism -- which is one reason I got the word wrong -- but I thought it was a great idea for a song.)

When I was sitting there being dazzled by my niece, I started thinking of some of my musical victories, all these songs I used to write, but chose not to mention them. One just came to my mind, and this goes back to when it was not part of normal conversation to speak of farts. Nowadays everyone talks about farts and farting, and I really don't like to hear it. But back around 1971 I wrote a song called "Farts," that was mostly a tribute to my Cousin Roto. But in the song he died, although of course in real life he is still very much alive. It's a weird coincidence between "Farts" and "I Get Weak" that a bed was mentioned in "Farts," too. Something like this, he was on his dying bed, which I said (the bed) "up and died, and my friend, his soul did depart. But from beneath, I heard him squeeze ... one final fart."

Anyway, what do you supposed happened with this song? Well, I'm being somewhat confessional today, and that might be my downfall, because maybe you remember this happening. But I went to a talent show one night at my college when I was a student and did "Farts," and was literally booed off the stage. This was back before farts were mentioned in polite company, so it was the same as if I had crapped all over the floor and did the happy dance in it. They literally despised my genius, discouraging me further from whatever shot I had at being a musical prodigy. I left the Union that night hoping they wouldn't recognize me on the street.

I'm proud of the accomplishments of my niece. Of course I wish I would have known about it all these years. But they grow up fast if you're not there to see it. And she's a prodigy. But can you imagine how much greater she might have been if I had been there to guide her along?
Posted by dbkundalini at 7:11 PM