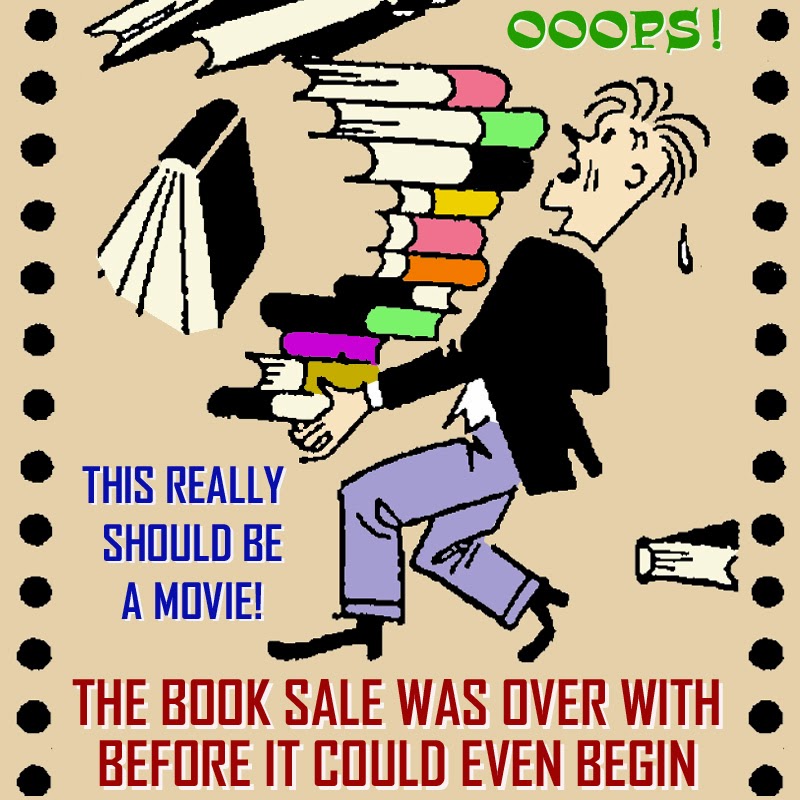 No matter what they say, I've always known it was true that money buys happiness. And I proved it last night. As a result, I'm the proud owner of-- what must be 300,000 books and probably 8,000 records. Now it's just a matter of finding the time to go through them and pick out -- whatever -- maybe a thousand I want. The key thing for me is, finally, I didn't have to fight anyone for them, and now I can browse in peace.

I'm a long time customer at the Biggest Book Sale in the State, held every year at the state fairgrounds. But you not only have to wait in line for hours, you have to fight hundreds of others to get up to the tables, get your hands on stuff, and then build and keep your stash till you get out. And when I say fight, that's what I mean. Because most of these guys aren't just "book lovers" browsing, but dealers -- sharks -- who know what's good and what they can sell. As a regular joe you're no match for their quickness and domination, hegemony, at the tables. It's a terrible experience.

So for a long time I've thought, What if I were a rich man? And could just show up and immediately buy everything? And send those bastards packing. Well, I found out; what's long been a fantasy is now a reality. Thanks to the billionaire, and my own billions, it's becoming obvious, there's nothing money can't accomplish.

The billionaire had some people who worked out the logistics to make this happen. They hired some guys (probably 40) to stand at the front of all the lines leading into the building. At the last minute I would take the place of one of them, and the others would gum up the line any way they could, once the doors opened. The book sale being for charity, they're always looking for money. So it was arranged that the main man -- their guy in charge -- would meet me at the front door. The logistics team had studied the official filings of the organization and found what they normally make at the sale, which is only around $300,000, a pittance. But I was prepared to offer $10 million for everything. A generous offer, to say the least.

And that's the way it worked out. The lines were backed up, winding up the hill and around the sides. Guys had boxes, bags, tablets (to quickly look up stuff), towels with which to cover their books, to prevent theft, the works. It was the same as every other time, with all the usual complaints you hear in line, "Why don't they open early?" and so forth.

When the time came, I moved in, the doors opened, the guys were gumming up the lines, and the main man was at the door. I told him, "I am in the door, I am the first customer at this book sale, and I am offering you $10 million for everything. Please mark everything sold."

He saw the cashier's check and called immediately for the doors to be closed. We stood there as he consulted around, with his various lieutenants. They went through all the consternation you'd expect, as to what to do with the hundreds of people outside. One of them came and asked me about it. I said, "Once a customer comes in and buys something, it's his. That's all that's happening. But instead of buying one thing, I bought everything." They knew then, there's no more sale, it's all over; keep the doors shut.

Of course someone had to go out -- and they did -- with a bullhorn to explain the situation. "A wealthy benefactor has purchased all the books. From your point of view, this is a travesty. But the financial windfall for us is fantastic." From inside, I could hear their uproar, but book people tend not to riot -- so they had limited options. The police moved in to put the squeeze play on anyone who got out of line. And the deed was done.

[I was told later that the charity people had taken out enough donuts for the disgruntled buyers that most of them were happy by the time they left. There was grumbling, to be sure, because a few of them thought they deserved a few more. You always get hotheads.]

I stayed inside for a while, milling around, looking at my new books. And, as I knew would happen, I saw a lot of crap, stuff I wouldn't want in a million years. But there were the good ones as well, except this time I wasn't stretching just to have some book-hawk dealer snatch it up faster. There's no price you can put on convenience. The place was eerily quiet, with a few of the charity people still murmuring. I heard one guy murmuring, "How are we going to get everyone to come back next year?" Which, frankly, in my opinion, shouldn't be an issue. People can just ask around if I'm expected to show up, and if I am, they will know well enough in advance to just stay home. Maybe I'll take out an ad saying I won't be there, or that I will be, whatever.

There definitely is a lot of crap among these books. I'm not even slightly interested in most of them. But of course I'm interested in quite a few of them, and will be able to make some great additions to my personal library. Which, incidentally, will be moving out of my bedroom into a new building I'm constructing on the west side of town. I bought the old grocery store that's been decrepit for the last 20 years, and am planning something like a $20 million building as my own personal library.

The good ones from today's book sale will be there, of course. The rest, I don't know what will happen to it. I heard there's a fishing worm plant in Alabama that buys old books and shreds them for worm bedding. That's an option, so I'll recoup some of my investment. Making this a cheaper operation than expected.
Posted by dbkundalini at 8:36 AM