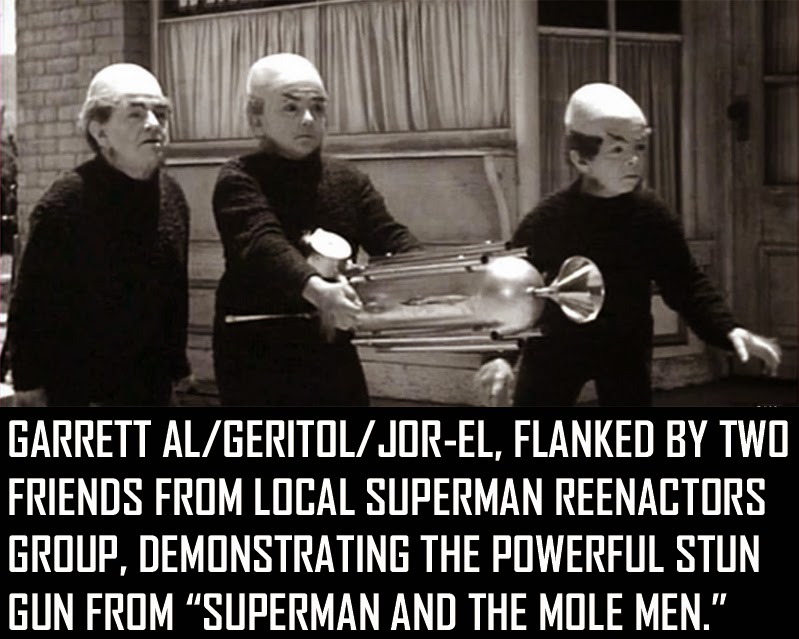 Tons of people have been milling around my half-acre. Proving billionaires also have groupies. Not so much for me, but the billionaire. Although when they learn the details of my own fortune -- $2.1 billion ain't chickenfeed -- I'll be in for it, too.

How well I remember how Elvis had these problems, so he had a big fence and gates around his place. And he, in all his awesomeness, was only a multimillionaire. I can see a huge expense in my future, not just for a fence, but dogs, a moat, flaming buckets of pitch, the works. Let every casualty be a warning to others!

So I was at home all day. I called the police to come clear the property. I could tell he was holding his hand over the phone and talking to someone. He came back on and said they were busy. I asked when would they be free? He said they're always busy. Lesson: Don't piss off the police, like I did when I said I could play them like a cheap fiddle.

I kept looking out because I was waiting for a friend, Garrett Al. The billionaire wanted a local assistant and asked if I knew anyone. I thought right away of Garrett Al, because we go way back. Not that we haven't had our moments. He was "all hands" and violent a few years ago, which freaked me out. But he got his head on straight, underwent a cosmic conversion, renamed himself, and has been a great guy.

I went to the door and motioned him to come in quickly, then I about shut the door on some other guy's hand. These people were out there with big handfuls of overdue bills, looking for help. Seeking an audience with the great ones. If someone doesn't talk me out of it, I will get a stun gun! Do not try me!

The billionaire took my word for Garrett Al, and was intrigued by the cosmic conversion stuff. We call him Garrett Al, of course; that's his name. My own playful name for him over the years has been Geritol, which sounds similar. Then, in 2010, Garrett Al was channeling Kryptonian energy (he's in a Superman reenactors club), and realized that "Garrett Al" sounds also like "Jor-el," Superman's father. He took on that persona and started having more of a mind for the stars, the energy of the heavens, and the movement of the planets. It was touch and go for a while, but we found if we could keep him away from Cape Canaveral he was OK.

I remember an amazing time when Jor-el took the robes of a prophet, and as a sign gargled for 30 minutes straight, a dramatic warning, one we could not ignore, of "rumblings of troubles" for the future. Later, he cooked a piece of toast to warn that our cause was "toast," followed by unzipping his pants under his prophetic robe to give this message, "We're screwed." So you can see, this is a serious guy, the perfect guy to have as your assistant.

We sat around the table -- Garrett Al, the billionaire, and me -- and were laughing about those days and Garrett Al's glory. I gave him some faux complaints, like, "Why didn't you just come right out and say there were 'rumblings of troubles'?" He laughed and joked, "Get me a glass of water and I'll tell you." Then he turned serious and said, "I had some weird interplay of the left and right brains. They were doing a dance and I was gripped by a force. I simply gave the message I got." I said, "Yeah, but prophets are supposed to have control over themselves." He pointed, "Touché, so true, but not newbies." The billionaire was lucky to get a guy with so much understanding.

The billionaire said, "For your first task, do you think you can clear the yard so we can get the hell out of here?" Instead of answering, Garrett Al went into a trance. We sat there for several moments that seemed like eons. Then I watched Geritol, a man transfixed by a force not of this world. And in a flash, Jor-el was to his feet and bolted for his car. Also in a flash, he brandished a stun gun, like a gunslinger from the old west. Hangers-on were falling everywhere, with others raising their hands, screaming and begging to be spared. Feverishly they motioned for him to let them remove the stunned victims, and, showing such extraordinary mercy, Garrett Al allowed it.

It might've been too much. I'm sure we'll face charges. But whatever, at least they won't be charges like Geritol pumped into that crowd! Whew! Finally, we were able to get out and go for dinner, the three of us sharing a lovely evening.
Posted by dbkundalini at 6:56 PM