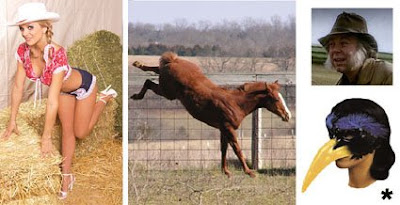 I'm operating on just a few hours of sleep this morning, so I hope this all comes out OK. I got in late after spending a few eventful hours at the Friday night grange dance.

For those of you who know my area, it's down the hill, then south a few miles, then you turn back west. About halfway down that road, take a left and it's on your right side, just a piece. All along the way I was thinking of how many people have taken this route ... and how many never came back.

I was driving slowly, very reticent about the whole thing. Along the way I'd glance up into a tree and see one of the Grange Brotherhood leaning against the trunk about 10 feet up. Up ahead, then, I might see a small mirror in another tree flashing somewhere else in the vicinity, who knows where. And maybe arms waving. All very subtle. (They need to have me as a member. I could teach them some of the first principles of stealth.)

Steadily I made progress, frankly afraid. I started thinking, It's been a good run. I've enjoyed life for the most part. And if I die tonight, they'll probably think of something nice to say at my funeral.

I got there and parked and walked toward the grange. I had regained my courage, since everything seemed so normal. The strangest thing I saw was an old farmer leading a team of about 10 horses from around back over toward the fence at the grove.

Johnny Hotshot's band was already playing and couples were dancing. I felt my wallflower nature coming on. But I went over by the drinks table and had a few and finally worked up the courage to approach a young lady -- a farmer's daughter in the tightest little blue jeans cutoffs -- over by the former grange masters portraits.

Just then, I don't know what it was -- there must've been something in the drinks -- I felt woozy and started to swoon. This is where it got interesting. You remember how I'm an expert in Group Dynamics and Human Environmental Science? As soon as I got woozy I felt something physically move in my brain. Like mental overdrive. Imagine you saw a jeweler take out a super loupe and stick it in his eye, and he's able to evaluate an entire diamond mine at 50 paces. It was like that.

I staggered up against the wall, and my eye went funny, with everything about the inside of that grange being mentally mapped, with chart lines, labels and everything, including all body language of the people, right down to a scientific understanding of the corsages the women were wearing. All in a flash. I even perceived the band was about to take a break. And it turned out later they did!

I had asked the young lady to dance. But in that fateful instant her face flashed and I saw the outlines of an orange beak momentarily flicker. Then two men across the room, looking normal in every respect, except another flashing came and in that instant each wore black hoods. They were signaling to her to take me outside. She steadied me and I went with her willingly but with complete understanding of the nature of this tryst, that there could be no trust. My hopes of getting lucky were never realistic in the first place.

She led me toward the grove, obviously for the romantic charades. And indeed, I saw couples scattered on the grass, apparently intoxicated and beside themselves. One woman was being chased across the lawn by a farmer with the handle off a scythe. She was giggling and her top was unbuttoned.

And then I saw it! Over next to one tree, there it was, the thing that I thought lived only in sick legends, but there it was in fact, a full blown figure eight orgy! Next I glanced over where the trees are thickest and there were the horses from before! This was it! I was being led over here to test my morals. And if I dared so much as to touch my zipper, it would happen. One or more of those brute horses would rear up, let out a dreadful "hee haw!" and I would immediately be kicked to death. And deserved it too, knowing all I know.

At that second I had a choice to make, which was no choice. She was offering her honor, but would I honor her offer? Absolutely, positively not! The Group Dynamic SLASH Human Environment was as plain as the beak on her face. It was the oldest Grange Brotherhood trick in the book. The supposed "lovers" huffing and puffing? Every eye was on me so I looked away. If I'd been kicked to death, they would've separated without a woman's sigh. And I would've made my bed in a shallow grave, with the horses being led back to the barn and given an extra large lump of sugar.

But not tonight... I'm sorry I had to disappoint those horses and their big bucked sweet tooth.

Back inside, the band was coming back from their break. We danced. And I danced with a few of the old grange wives, careful to keep their big ponderous bosoms from touching me even if it meant dancing at arms length. I could see some of the Brotherhood, husbands standing in the shadows by the curtains just off the stage. Endlessly testing me. I definitely wasn't going to get lucky with any of these gals.

I enjoyed a few more drinks, did some more human environment mapping and group dynamics mental filing and went home. All in all, for the most part, I'd have to say it was a lovely evening.

-------------------
* The photo collage does not represent the actual people and animals at the grange. It is for illustrative purposes only. The farmer's daughter wasn't quite that cute.
Posted by dbkundalini at 5:16 AM