As Of This Writing 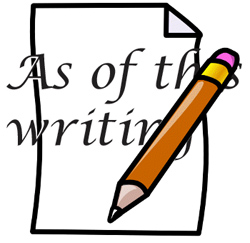 Most of the posts I write have an evergreen quality to them, that's been pointed out to me by others, and as of this writing, I agree. But this one might be different, since time is advancing on, it now being 6:42. Gotta chug along, so I'm not still writing at 7:00 p.m. I don't want anyone to get the impression that I labor over these posts for hours at a time.

It's a matter of minutes, like that Madonna song, "4 Minutes," which, as of this writing, is about what it's been since I started. I've only got four minutes to save the world. I just saw that CD yesterday at a store for $1.00, and to think I paid that a few years ago just for the title song! I could've waited and had the whole album. But I didn't want it anymore. As of this writing, my interests have shifted.

Speaking of albums, guess what, I bought the New York Dolls' LP yesterday for $10, then when I came home and played it, there was a terrible skip on the second track, "Stranded In The Jungle." It didn't skip ahead, but kept backtracking on one line toward the end. So I tried some stupid internet theory for fixing skips with a sewing needle and a paper horn. Naturally, as of this writing, my record is all scratched to hell from the needle. It seems there's no way to guide it and actually find the scratch with a needle. So instead of having a nice LP, I've got it shoved in the case and will probably throw it out in Wednesday's garbage. As of this writing, I'm bummed out about it.

6:47 p.m. - I might have dawdled a little too much on that paragraph. I don't know if you realize it -- you probably do -- but "Stranded In The Jungle" is an old '50s song, recorded by several artists. We had the 45 of it by one of the groups when I was a kid and always liked it. As of this writing, it's still one of my favorite memories from childhood. My mom had some good records, but as of this writing, she probably doesn't.

All kinds of things, as of this writing, are either banal or profound facts. If you're reading this on some kind of super internet archive in 2050, most of the things that are true right this minute won't still be true then. As for me, as of this writing, I'm alive, but in 2050, unless I'm extremely lucky or unlucky, will be dead. At that point I won't have a favorite song from childhood.

Even big facts, of course, will no longer be true. Things as of this writing that we take for granted -- like who the president of the United States is -- will be easily outdated, and, if we still have presidents in 2050, it will be someone else. Maybe one of Barack Obama's daughters, who, as of this writing are still children.

Well, sorry to everyone in 2050, but I have to cut this little exercise short. Because as of this writing I have duties around the house I need to complete. As of this writing, to put the big finale on it, it is 6:51 p.m., and it just switched over to 6:52 as I was saying that.
Posted by dbkundalini at 6:52 PM