The Pink Professor -- The Heavenly Marriage 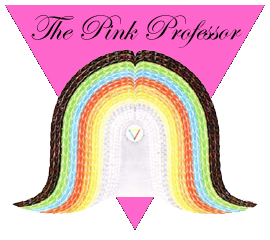 I've entitled this "The Heavenly Marriage," but that's not to imply that I and the Pink Professor are actually getting married at this time, the sort of everyday legal thing that people do. Quite a few of the states, in fact, would not legally approve our union, for whatever reason, more or less all coming down to bigotry and ignorance. But presently he and I actually have the inside track on that, if we choose to take it. Right now, he and I are thinking of our soul union, the joining together of lovers in a more wonderful sense.

I would guess you only needed a glance at the illustration today to see that something of the highest union is being represented, the guru chakra, the small inner triangle and its smaller surrounding area, and the larger sahasrara chakra, portrayed as an umbrella shape, which I believe is meant as a cutaway/cross-section kind of thing. This graphic is online at this addy, but it's taken (with or without permission) from the book Layayoga -- The Definitive Guide to the Chakras and Kundalini by Shyam Sundar Goswami.

My understanding of the match up of these representations to reality (the way I imagine it) is limited, but Goswami cites many sources that explicitly say these forms, with variations, and this includes the other chakras as well, are seen more or less as pictured in his book. The way I generally take it, at this point anyway, since I myself haven't glimpsed them, and of course I'm far from being the authority, is that they represent something like pulses or congeries of energy, and thus are similar to a roadmap to territory. The energy, again in my way of thinking, could be pictured as small (micro or specific) or large (macro or cosmic), amounting to the same thing in the sense that it can't be pinned down and conclusively defined, but it can still be perceived within our consciousness.

That said, it seems obvious to me that the precise labels (names of gods, etc.) that are attributed to them in the gurus' explanations are changeable, that a person's culture, spiritual background, and even preference can give different labels to them that would be just as authoritative. (This is a tricky question, what authority is in spiritual matters.) As an example, guru in the chakra in Goswami's book is Brahman (p. 263, Goswami citing another writer.) Guru is looking up, beholding forever the 1000 petal sahasrara chakra and its contents looking down; the chakra has multiple divine labels and powers.

My theory is that, just like Roman and Greek gods having the same qualities yet different names, you can read the various traditions of the world into the same energy forms. Such as Christ (Son of God), the Father, and the Holy Spirit. Or, let's say we had a seemingly less elastic tradition such as Islam, Allah would be uppermost, then -- I don't know -- aspects of Allah's power below, or probably angels and exalted prophets. But Islam isn't one of my specialties, my specialties being writing humorous blog posts and going out to eat.

Anyway, I know it's going to be the rare bird who's read this far, so at this point I could say anything. Having said all that, I also believe the same energy forms (chakras) can be read in lesser ways, although not that much lesser, because I don't want to discount the love I have for the Pink Professor and the love the Pink Professor has for me. Whether he's top dog, the sahasrara, and I'm the guru; or I'm the sahasrara and he's the guru, those are either beside the point or would alternate depending on our moods. Suffice it to say, I'm one of them and he's the other in this little scheme I'm scheming right now.

I know I lost 90% of you, but that's OK, because there needs to be a certain amount of sifting. That's the way it was for my mother, back when they sifted flour. You started with about 20 pounds of flour, but by the time you got done sifting, you had about one pound you could use. I remember many a time going out behind the garage to bury lumpy flour among the furnace cinders. But I digress, unnecessarily, since I know I just lost so many readers than now I have .0001% of what I started out with, which was about 5.

But really, can you see what I'm saying about the Pink Professor and me? Our love, in my not so humble opinion, is the highest love, like that of God and the highest aspects of God. (And lest anyone accuse me of blasphemy, and you happen to be swayed by biblical proof texts, the Apostle compares the ideal love of marriage partners to that of Christ's love for His church, Eph. 5. But, really, blasphemy? Are charges of blasphemy even sustainable these days? You're dead in your sins and blasphemy's all you're worried about? LOL!)

OK, so there we are, Frick and Frack, Top Dog and Top Dog minus some infinitely small number while allowing still for equality, two aspects of energy very much in love [personal tribute to my mother there], George and Gracie, Bogcall and Bacart, Armstrong and Aldrin, Barack and Michelle, Butter and Oleo, Sambo and Tigers, Lennon and McCartney, Lady Gaga and me when I spent the night at her place, Bo and Dacious, Awe and Some, Se and X, Anderson and Erickson, John Paul I and John Paul II, Santorum and Turtles, Benedict XVI and any offending priest, Goodson and Todman, Adolf and Eva, Bismarck and Donuts, Hanna and Barbera, Lieberman and Republicans, and Skunk and Shitheads, not to be too redundant on the last two pairings.

We are joined together -- the Pink Professor and I -- in an eternal love like -- notice I said like -- a heavenly marriage, which I believe is more wonderfully called a hieros gamos. The first word signifies love at first sight, i.e., love from the moment we said "Hi," and gamos refers to the song "Game of Love" by Wayne Fontana and the Mindbenders, which, through some unfortunate oversight, seems to restrict love to male/female pairings. That'd be OK for Adolf and Eva, but what about Goodson and Todman, Bismarck and Donuts, and Rick and the Ninja Turtles?

As to me and the Pink Professor, we're like that, in like Flint. I can smell him coming a mile away, my nose in the air like a dromedary discerning the first hint of water at an oasis. And usually when I see him, his nose is in the air, too, sniffing for me. We love like Rumi and Shams, and I'm willing to be a fool for his love, as in the Rumi verse, "Drink all your passion, / and be a disgrace." (from Coleman Barks, The Essential Rumi, p. 3). We are absorbed in one another's eyes, physically and spiritually pouring over, and frequently making a mess.

Yes! Yes! Yes! Oh, God, to think these are all natural body motions! I'm overwhelmed by every afternoon delight! And being afternoon, afterward we make a few sandwiches and watch Jeopardy.
Posted by dbkundalini at 4:17 PM