A Man, Not A Mouse 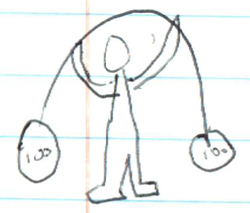 I went by a muscleman gym -- the Pumping Iron Gym -- the other day and started thinking about "The Rocky Horror Picture Show," how Dr. Frank-N-Furter quotes the old Charles Atlas ads about making you a man.

The trick, in my opinion, would be showing up the first time, getting the glances of the other guys pumping iron. But a little reflection tells you, they too were one time a mouse. Then they started lifted weights and soon were kissing their biceps.

There's another reference to this stuff that I can think of, a la Rocky Horror, a song by the Bonzo Dog Band, "Mr. Apollo," in which the Bonzos sing, "He's the strongest man the world has ever seen. And if you take his courses he'll make you big and rough, and you can kick the sand right back in their faces." Since in the comics Mac got sand kicked in his face and needed to bulk up so he could destroy the bully. There's one place where the Bonzos say, "I'm two separate gorillas."

Could they turn me into a man, not a mouse? I was already a member of a fitness club and that didn't work out. I haven't got the desire to drive down there everyday and work out on a bunch of germ-ridden equipment. So what makes me think I'd like to show up at the Pumping Iron Gym for the same thing. I'll probably just have to stay a 170 pound weaking.

But say I did go. It'd probably be like the fitness club, where it's interesting, they have the walls over by the weights lined with mirrors. You can see yourself from every angle picking up the weights. And they're definitely watching ... themselves. It's a narcissistic thing, all the staring in the mirrors, but you can't help it. Even on the thing where you pull down the weights, some kind of bench, there's a dozen of you in the mirrors, it's mesmerizing. You scratch your nose and the whole place scratches along.

The Pumping Iron Gym, though, they're not just into fitness. This is for truly hulking out, like getting you ready for the Olympics. If you keep going there, and if you're faithful at the weights, you're going to have your blood vessels bulging out, along with everything else. The only thing that's going to grow tiny, if you're a man, and I don't know how I would know this, since honestly I've never seen a body builder naked, is his you-know-what. Why? I don't know why I think that, but have you ever seen a stalking bulge in a body builder's pants; I haven't either. It's the only part of you that's not getting a workout. The rest of your cells cannibalize it.

The corollary in women is in their breasts, since they lose all evidence that they ever had breasts. You see them on magazine covers at the bookstore. They're hulked out, their bodies, and they need the full length bra for the upper girth, then they replace the original cups with little pieces of flat uncupped material. All they're doing is covering up the little things that stick out that babies need to eat from. But these gals, as far as I know, and I'm sure there have been exceptions, aren't reproducing. Who would they get for a partner? A mouse like me would be turned off, and the musclemen couldn't do it with the little pinky they've got left. It's ridiculous.

It'll never happen to me. I'm just not that driven. I'd like to be driven to get in fairly decent health, with fairly decent exercise. I need to get out and walk, that's for sure. That'd be better than going to their gym. With gears, pulleys, levers, extra weights, and other gizmos. There's someone out there trying to invent even more wicked looking stuff, to give these guys the illusion that any of it's desirable. Then they take supplements that come in plastic jars the size of buckets. They're hooked in that world, a sad thing.

As for me, I'll continue on in my mouse-like frame. And if I sprout a tail, fur, and cute little ears, so be it, but I doubt that's physically possible.
Posted by dbkundalini at 9:43 PM