The Pink Professor -- Don't Judge Us 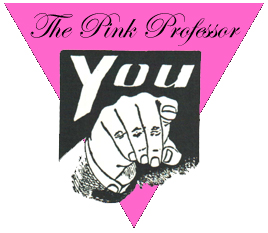 It's been real nice out, so I suggested something different for me and the Pink Professor to do. Why not get out of town, go to a different town, a small town in the area, and spend the day? So that's exactly what we did. Maybe it wasn't the greatest decision.

We stopped in some little Mom and Pop place for breakfast, and I was amazed at the prices. We had stuff like biscuits and gravy, bacon, juice, etc., coffee, and the bill was something like $11 combined. There were some townspeople in and out, and we're sitting there not knowing a soul, but we felt right at home. Till I heard some whispering -- you know sometimes people are hard of hearing, so you can hear them whispering across the room? The quick glances of different ones over their shoulder gave me to think someone was looking down on us. What's the problem, you never saw two guys out for breakfast before? But I didn't really say that.

After breakfast, mid-morning, we were over at a local park. I'm kind of a kid at heart and still can have a lot of fun on playground equipment, in moderation. So we were doing that. There weren't any kids there, so we were swinging. I always like it when you've got someone else swinging, then you're grabbing their feet, tickling them, smacking their butt, etc. It gets the other person riled up, and usually they laugh so hard they finally get sick. Or beg you to stop. Or get off and chase you around the park.

OK, maybe a few of my butt smacks against the Pink Professor's posterior were a bit much, a bit loving, but I figured to the naked eye they'd look merely like slow motion smacks. I turned around and there was a couple of folks looking at us, eyes bugged out, mouths agape. I put my hands in my pocket like I'd been doing something wrong. The Pink Professor quit swinging and we stood there quietly, like we were confined in invisible stocks. The couple shook their heads and walked off.

Then I looked and there was another guy, this guy on a bench, and he quickly looked away. Strangely, he motioned to us to come over. He said, as best as I remember it, "You probably think I was judging you too. I wasn't. I just happened to be looking over there when you looked over here. Then I was looking away already. I didn't want to appear to be judging you for being together. If I was any younger, I might've joined you." I explained that we too were fairly old -- obviously not as old as him. Anyway, I said, it's never too late to do the right thing for yourself. I told him that we met only late last year, 2010, so don't give up on love, it can bloom anytime. His eyes lit up. I felt compassion welling up in me, and went over and gave him a big old hug. One beautiful soul! He explained his name was Lyle.

Then we were out for lunch, a different place than breakfast, but it was the same old story. By now, though, we'd had a busy morning, it was getting hotter, we were perspiring moderately, and no doubt some of that came across like some kind of natural, sexually attractive musk. Plus, after some great physical activity my voice usually sounds a little huskier, and I did have the beautiful spirit of Lyle on my mind, maybe my gregariousness got the best of me. I was looking at the Pink Professor with adoring eyes, and some of the people around spotted that. I saw some judgmental glares, but I was so filled with adoration, this time they had good cause.

Evening came and we thought about checking into the local motel. Here's where we learned that we might have real problems. But the host was nice. I didn't catch his name but he looked like a Slim. Slim had a slow drawl, that kind of voice that if he'd been chewing something he would've had to pause every 15 seconds to spit. He seemed honest. He said, "I don't care so much the kind of people who show up -- just so they pay their bill and don't wreck the furniture. But I know the other boys pretty well... And I'd suggest you park your car 'round back and leave before the cafe opens." That'd be about sunrise.

I looked at the Pink Professor and he looked at me. We thanked Slim for his kindness. I gave him $5 for a tip. Then we got the hell out of that town. I might go back sometime -- incognito -- and look up Lyle, a very beautiful soul.
Posted by dbkundalini at 3:49 PM