In Solidarity With The Colorblind And Dogs 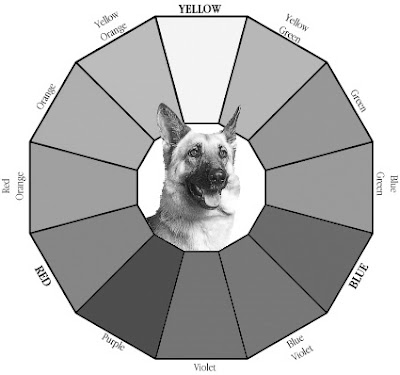 Note: I don't know how to make the headline black print, so other than that and whatever else I can't change, my signature line, etc., today's post will be completely black and white.

Like everyone else, all I have as far as sight goes is my own experience. I can't see the world the same way other people do, although we all assume that people who see red, green, and blue, are seeing them the same way. Certainly if you ask someone if a particular color is red (and it is), they're going to agree to that fact. But someone who's colorblind probably wouldn't be able to agree to it. Unless they're able to make distinctions between the shades of gray through long experience, I don't know. Of course if they see a stop sign, by now they would know they are red by law; it's right on the driving test. The contrast is that dogs can't talk, so there's no agreement there, nor do they take driving tests, although conceivably they could ride along if the examiner happened to be blind.

The big difference between colorblind people and dogs, other than being people and not dogs, is that colorblindness isn't our typical experience as a species, but for dogs, they don't know anything else. Apparently something happened genetically, or if colorblindness came later in life, it might've been from looking at the sun or resulted from an illness or disease. Dogs also have illnesses and disease -- they share that with chickens, at least, and probably other birds and animals -- but colorblindness for them is innate, a given at birth. Just to take it a step further, birds see color, which is why they're so colorful, for mating, protection against predators, etc. The biggest difference between birds and colorblind people is that they (birds) can fly unaided by mechanical means.

Speaking of birds and dogs, I watch my dog a lot when I take her out. And she doesn't take birds seriously. Really! Occasionally she'll make a feint in their direction, but she's learned that birds fly, whereas squirrels, which she loves to chase, do not (leaving out flying squirrels, which we don't have where we live.) And it could be that some of her colorblindness affects her ability to distinguish squirrels from surrounding trees and leaves. The other day she was less than three feet from a squirrel, and as long as it sat still in the leaves it was going to be safe. But as soon as it moved, she noticed it and chased it up a tree. But I, who can see colors very well, noticed it right away. A colorblind person wouldn't be able to say that. Although to be entirely truthful, sometimes I have a hard time finding dog poop in among the leaves, because it's either the same color or a shade off. I can only imagine how hard it is for colorblind people to clean up after their dogs.

Anyway, colorblind people, for all their difficulties, are all right in my book. And the same goes for dogs.
Posted by dbkundalini at 10:43 AM