The Human Environmental Scientist -- A Restaurant 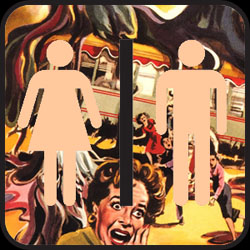 The human environmental scientist stops in today to visit a restaurant.

A restaurant is like a kitchen and dining room away from home. Each one serves a little bit of everything, depending on what they think their customers might like. It's all meant to be eaten and drunk.

I went in -- this is a place I've been before, so I'm used to their ways. But I don't think I'm such a regular (even though I've been there at least 25 times) that anyone recognizes me. I never say "the usual," even though that would be much easier if it'd do any good.

Anyway, I'm taking off my strictly dining hat today and putting on my human environmental scientist hat. I think of human environmental science (HES) as a form of anthropology that seems to be overlooked, being present in our everyday environment and examining it with a certain detachment. And I'm the perfect guy for the job, since I seldom feel so at home that I become comfortable. I'm sitting there like there's something wrong with me, aware that a camera might be tracking my every move. So it's like I'm wearing a shock collar, that's how aware and detached from the pleasure of dining I am.

I jotted down a few notes, so I think I'll just quote them and add whatever else comes to mind:

"As a human environmental scientist, I'm at a busy restaurant and it appears no one notices me. I blend right in." -- That's true, and it sets the scene. I'll have a further development of what I mean by no one noticing me in the next quote. As to this present quote, it establishes the fact that I was there consciously as a human environmental scientist, showing that this isn't a later fictional concoction for the sake of looking like a big shot. To me, it's interesting to "blend right in," since I'm all too aware that someone could be alarmed upon my appearance. "Who's that studious creature over there with the notebook and Big Ear scribbling who knows what?"

"That's good. Any observation of me has made note of the clear fact I'm not a dog or a three-headed alien." -- This is important, because it's something I occasionally think, if I were a dog everyone would be looking; it would be most unusual for a dog to be sitting in a chair at a restaurant with a plate of food. The same for three-headed aliens, which would be strange enough to raise a clamor that wouldn't easily abate. The upshot of this note is that I fit right in, so I'm able to made human environmental notes to my heart's content, as long as I'm discreet.

"The smaller people seem to have smaller portions. Makes perfect sense. A bigger guy has it piled high and deep." -- So it's true, just as I figured it'd be, that the size of the eater in part determines the size of their portions. There's a ratio in there somewhere that could be worked out. But your present human environmental scientist isn't good at math. I keep thinking, Why couldn't I be a math prodigy? I probably could've been if I would've applied myself in school. But I didn't, alas. Still, you don't have to be a mathematician to see that big attracts big and small small. And there's a lot more to this one in terms of the restaurant, because, since it's not a buffet, I'm sure they prefer the bigger eater. But if it'd been a buffet, of course they'd slit their wrists if this particular mountain of a man I saw showed up.

"I notice [*] some are eating with a lot of ostentation, blowing a trumpet before each bite. How vain. [*] My original note said "a lot of people" instead of "some," but I crossed it out. -- The key thing here, though, what is most relevant for HES, is not the negligible difference between "some" and "a lot of people," but the unusual (in my experience) detail of people blowing trumpets between bites. Just in jest, let me say, that'd be messy for the trumpet! Crumbs, mayo, cheese, grease, flecks of lettuce, not to mention all the moisture. I'd want to make sure I cleaned my trumpet really well if I had to get to a concert! That's probably why they even had trumpets, because they're part of a band. Visiting town, hoping to stir up some publicity for the concert. But as far as I'm concerned, it's ostentatious and vain, since the phrase "blowing a trumpet" has at its heart those connotations.
Posted by dbkundalini at 3:38 PM