The Edge Of Everything 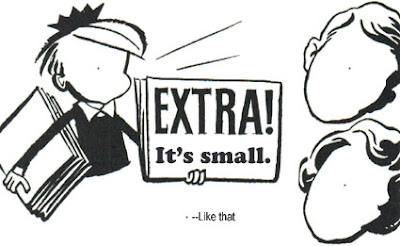 I probably shouldn't speak. I know it's wrong. Those who know never speak. I'm already kicking myself, because when this gets out there ... oh boy! ... I don't know what might happen. The world might be squeezed into a dot just to teach me a lesson. Probably not, there'd have to be some advance warning, wouldn't there?

But I'm bustin' ... I gotta tell someone, anyone, even if it's just you ... you're a representative of the human race, right? Then you have a right to know what's going on. But it's going to kill you, mentally. You might end up calling in sick forever and then find you've lost your job when you finally wake up from your revery. I can't be responsible for that -- This blog is for entertainment purposes only. Reading the blog implies agreement to my terms, that I'm not responsible for any boneheaded thing you do as a result of reading something here that was "for entertainment purposes only."

Really, though, maybe you won't be entertained, maybe you'll be blown away, in which case, I'm not responsible.

And guess what, it's not that hard to do. I barely had time to be poking around out there, since I have plenty of other responsibilities in life and have to be on my guard every minute, because I seriously have to keep it real. I'm as crystal clear, level-headed as they come, and that's what ultimately makes this the more weird. Notice I'm making use of some funny language, like fuh-reaky and tuh-weak? That's a defense mechanism, just to be honest with you, because what I'm talking about is really happening. And it's hard for me to be honest about it.

No, no, no, this blog is for entertainment purposes only, nothing I say is meant as real or serious. I have to keep the disclaimers coming because I'm very protective of my viability. Anyone who can just lose themselves, that person I don't understand. I keep coming back with the protective stuff. Read the disclaimer and heed it.

If I were reading a blog like this, I'd say the guy can't be serious, and I would've left before getting this far. It really ticks me off to see so much preface for so little book. Either get to it or you're wasting my time. I went through a phase there, still not entirely out of it, when I saw all books explaining things as frauds. So if I was that way with entire books, imagine what I'd be with a blog like this where the guy seemed crazy, was saying it was for entertainment purposes only, then saying it was entirely serious and real, etc. I'd be long gone.

Which is OK, because, like I said, I shouldn't even be saying anything, for various reasons, and I don't know that I will. Which leaves this blog as a truncated piece, that ultimately says nothing. And if no one gets it, that's OK too.

On the other hand, no one's likely to believe me anyway, so if I get in trouble from it -- the Inquisition -- I have a ready explanation, it's a humor blog, and one of my voices is the apparently crazy guy with more on his mind than could possibly be true.

Anyway, here it is, I've been to the edge of everything, and guess what, everything out there is so small, so minute that you can't actually see it. It's like the dots in the picture, except the dots you can see. They're not infinitesimal, they're not subtle whatsoever. There's no comparison.

Further, at the heart of everything, it's not simply One like you might imagine, but it's in multiple locations, as a community of knowing energy, interrelating. That's not to say everything isn't One -- I believe it is -- it's just the expression of it is multiplied.

To continue, absolutely everything of this ultimate reality could be contained locally, in a small place, even on my Grandpa's half acre, where I live. But anywhere you go, even if you stay home, you'll find it.

In addition, the revelation of this reality is so tricky that you're not likely to get it, but you might. All the striving we do helps but isn't near the final step, which finally has to be taken for you. As for me, I can't systematize something I can barely comprehend. So take all this with a grain of salt, which, by the way, is very large in comparison.

In conclusion, This blog is for entertainment purposes only.

Epilogue: The next chance I get, if it's allowed, since I probably screwed up by posting this entertaining blog -- although in my defense I was bustin' -- I'm going back out there, and, if you knew me and my mother, you'd know I won't be taking no for an answer.
Posted by dbkundalini at 2:28 PM