Read Through My Blog In A Year 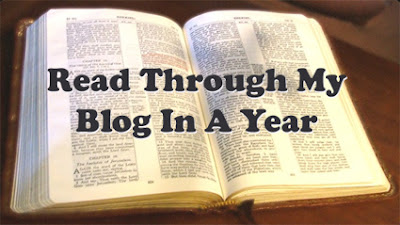 I appreciate so many of your comments about the quality of my blog and the devotion many of you have toward it. It does my poor heart good to know that you're out there and that you're benefiting from it in such deep ways. 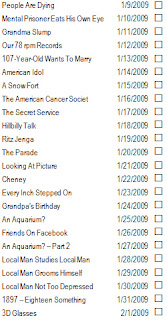 A few of you, admittedly under 1000, have written in asking if I had a systematic way for you to read the whole thing, a question I've neglected to answer for a while. Because I thought, What's the problem? Just go back to the beginning and start there. But then the more you think about it, even with the greatest devotion things can come up, we lose our place, or we feel frustrated with our progress.

I was working on a checklist of titles and the publication date, but I'm also a very busy person and it turned out I didn't have time to finish it. But you can see I made an effort with some of my early posts from 2009. Like you, no doubt, just reading the titles gives me a warm fuzzy feeling. I'm looking at it and trying to remember what "Mental Prisoner Eats His Own Eye" was all about; obviously he was mental, and if he chooses to read my blog through in a year, I'd love to hear from him, if he can read that much with only one eye, assuming he hasn't eaten it in the meanwhile.

Ah, what memories, for me ... and you. But they're more than memories, of course, since in the course of this blog's lifetime it's come to mean so much to so many. I'm trying to think of this one guy's words, something like, "I've read many sacred writings in my life, and I've only burnt a few of them, whatever I didn't like. But I would never burn your blog, kind sir, because to me it is a modern devotional classic. People in far off lands attack and kill one another when their sacred writings are burnt on a far away shore. If any foolish individual chose to print out and burn copies of your blog, that would be the end of the world. Mankind would refuse to exist until he [Mankind] was killed and utterly extinct. Like the Dodo Bird."

I appreciate words like that, because I can see that it's thanks to me that he's stable enough to go on. Maybe I'm the only reason he still hasn't eaten his eye. So I'm justifiably proud.

Anyway, getting to it, how would you read through my blog in a year? With today's post, I think we have 1149 posts. And I'll probably write something tomorrow, so let's just round it up to 1150. Leaving out leap year, just for the sake or argument, we have 365 days. Dividing 1150 by 365, we come up with 3.1506849, a fairly cumbersome number. The easy answer, then, is, Go back to the beginning, by working down through my archives. Then make a chart and proceed along reading 3.1506849 blog posts a day. At the end of the year, if I figured it right, all you'll have left are the 365 other posts I would have written in the meantime. And since I'm no good at math, I'll leave you to factor those in somehow. I guess it'd technically be, 1150+365, then divide that by 365, so 1515/365=4.1506849. So it's just over 4.15 blog posts you'll need to read. And sometimes I write two a day! The crazy thing about this, though, is if you want to read it through each year, there'll always be at least 365 more to add on to the previous year, meaning, eventually, if I live long enough, you'll be doing nothing but reading this blog! But there are worse things you could be doing!

Why don't I miss very many days here? Because, quite frankly, I don't want my followers to see it as a completed canon, because then I wouldn't be able to add more.

Confidential to Pat in Pittsburgh: I'll consider highlighting my deeper thoughts in red, if you really think it'd help in your personal devotions. Please let me think about it a little while.
Posted by dbkundalini at 5:06 PM