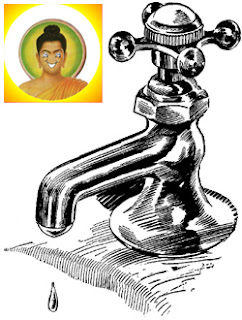 Among the many inspiring stories from Sri Masturbananda's ashram, perhaps none tells of a greater transformation than the story of Gregor, the guy they called "The Little Drip." I think of his story often, anytime I need a boost in my devotions.

I only knew him afterward, but those who knew him before say he was pathetic. He'd be at his devotions, trying to follow the Master's teachings, but very little came of it. It was a real problem, and only became worse the more the other chelas (students) knew about it, and the more he thought of it. He had a lot of shame.

Remember, Sri Masturbananda's teaching is that we (men) can glimpse the Divine for two or three seconds at a time, at the climax of our devotions. We seek to eventually know divinity in a life of oneness. For now, we work ourselves up, then -- ahh, there's the Light! Then we clean up and get back to our work around the ashram.

Anyway, they started calling this poor guy, "The Little Drip." He was like a leaky faucet, but anytime he worked the handle, so to speak, nothing happened. I'd guess it was a playful nickname, but of course it hurt him. They say he had a weak, crooked smile, like he was very conflicted. But afterward -- Oh boy! -- he had a big fat grin, a smile as big as all outdoors! That is, after the Master stepped in to counsel him.

The Master's counsel was bold, personal guidance, including Gregor being able to accompany him as he went about his own devotions. Now, I've said it before, no one can look upon the Master in his ecstasy. But Master had Gregor behind a thick curtain, yet he was still able to behold much of Masturbananda's radiance. Then the words of power that came from the Master's lips, particularly as he reached his glory, just before the roof of the place blew off, had to be something from Heaven. Lastly, Gregor witnessed the tearing of the curtain between them, from bottom to top, exposing sights that I can only imagine. I'd call it a full frontal Transfiguration.

It only took one such experience and Gregor was a new man. No more was he "The Little Drip." A more apt name would be "The Gusher" or "Super Soaker" or "Old Faithful." Because from that day on, there was no more faithful chela at his devotions, and certainly none who could reach the divine in a more intense way. The guy was a mess ... and that was good!

Of course, the other chelas were very curious. They wanted to know what Sri Masturbananda had said in his climactic moments. But Gregor would never tell. To him it was a sublime, powerful mystery that had to be guarded at all cost. All he gave was this cryptic reply,  "Were I to speak one word of it, fire would come from the stones and consume you..." They glanced down at his stones and saw, clearly this was a man in heat.

We all know the end of the story, how Gregor became one of Master's closest disciples, and an inspiration not just to the ashram but to chelas around the world. Most of us are already more than a "Little Drip," but in him we're inspired to be so much more.

And so the story ends, with this saint of God an inspiration to all. It was not long after this that Sri Masturbananda gave Gregor the greater monastic name of Sri Niagarananda, his symbol forever the wash-bucket and mop.
Posted by dbkundalini at 9:18 PM