All Is Forgiven When You're Dead 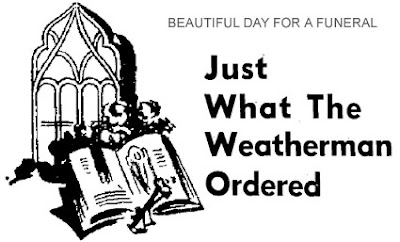 A local TV channel's weatherman committed suicide. True story. I hadn't personally ever heard of him, since I don't watch that channel, but of course I feel sad that something, whatever it might have been led him to do that.

I heard about it on one of the competitor channels, and they gave a nice presentation on him. Apparently he was something of a cut-up on air, since they had him flapping like a wild chicken, dressed in a Superman costume, and so forth. Perhaps not the most flattering images, but they meant well, that he was well known and respected for various antics.

OK, but I have some objections. If the people on the competing channel aren't watching the other guys' shows, how do they know about him? And how did they become so chummy all of a sudden, since it's usually a cut throat business. Even while they were praising the deceased weatherman they were still using slogans for themselves like, "The most accurate weather report," as if to say the competitors' weather sucked. Maybe that's what pushed him over the edge, everyone questioning his accuracy.

The whole thing has been on my mind, as you can tell. It reminds me of the old truth that once you're dead, everything's forgiven. You can kill a hundred people, but once they get done executing you in the electric chair, you're in for an honorable burial. No one comes around and kicks your body. At least in America. In Libya they probably do. Or Iran. I think it makes a certain amount of sense. After all, it is your body. Why not pulverize it if you were that bad?

The weatherman, of course, wasn't a bad guy. According to what they're saying. They didn't mention why he committed suicide. Maybe no one knows. But they are definitely promoing the various signs of suicidal behavior, that the rest of us might be vigilant in the face of similar behavior in our loved ones. So that's a positive.

When they started promoing the upcoming story of the dead weatherman, I figured it was going to be some old 80-90 year old retired weatherman who was beloved in the area. Because I believed they used the term "dearly loved" or "well loved." So I was expecting to see an old black and white picture of the first weatherman in the area. But then it turned out to be this young guy, 41, flapping like a chicken, and I thought, "Whoa." They used the word suicide and I was thinking that's unusual! Who's happier than a weatherman? No one! Maybe the sports guys, whose constant happiness lies in their superficial approach to life.
Posted by dbkundalini at 6:05 PM