Dale And His Dog 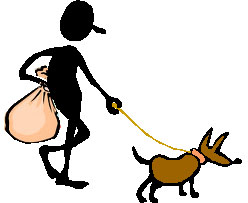 I got the unhappy word yesterday that a dog died in the neighborhood, Dale's dog.

It was a matter of having to put him to sleep, which doesn't take away the sadness even though it was elective to some extent. Dale did it, and it broke his heart, of course, but the dog was in severe discomfort. He was old and completely under the weather.

We've all had troubles with pets. It's a trade off, the love they give and get with the fact that they live extraordinarily short lives. But at least dogs fall midway on the spectrum, not as long-lived as horses or cats but beating gerbils, hamsters, mice, and sea monkeys by a country mile.

We're going to miss Dale's dog. For all these years, it's been, "There's Dale again and that dog." We look out and see them pass, or maybe we don't, since it's been a constant sight several times a day for virtually ever. We started taking it for granted, but ... now ...

I watched them pass the last time ... it's been a week anyway.

They were basically one. Where one went, so went the other. You might say, it was Dale and two left legs or two right. Or it was the dog and six legs. The dog loved him and he loved him too. If the dog ever looked for a reason to bite Dale, he never found one. If Dale needed a fur to pet, the dog was always there. And if the dog needed a hide relatively free from fur to get close to, Dale was always there.

Sympatico. That's what Dale and his dog were, in every decent way known to man.
Posted by dbkundalini at 6:18 AM