The Pink Professor -- The Biological Impetus 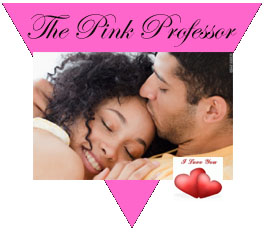 It's mid-November and love's in the air at the Roadhog Roadhouse, the bikers bar frequented by The Pink Professor.

The fact that it's mid-November has nothing to do with it, of course, since there's always a little something going on indicative of the ways of Cupid, the winged fairy of fornication, at the Roadhog.

And none among the patronage of the bar notices and appreciates it quite like The Pink Professor, as he settles in and enjoys an imported beer. Because there's no one else quite like him there, so appreciative of life, on the one hand, and on the other, so quick to put it all in some larger context.

Things get underway every night around dinner time. They're open through the day for the occasional customer, but things really get revved up when the day is passing toward night. The Pink Professor checks in through the day, maybe dropping off the morning paper for the staff. It's still good, even though he might've cut out an article or two, maybe a recipe or cartoon.

Then he checks back at night, at no particular time, which is really a sign of something. It's a sign that he belongs there, because he doesn't have to check in at a particular time. Everyone's expecting him, but whenever he gets there ... that's when he gets there. He no longer has to prove himself, like might happen if he were still in process of going for acceptance but not serious enough about it to show up at the same time each night.

Anyway, love is always in bloom at the Roadhog. The waitresses have their pick of the clientele. There's several couples from the neighborhood in there to play pool and spoon and perhaps shop around. There's ladies night, which the ladies and the guys appreciate, and so forth. It all works together; you get enough folks showing up, and enough drinks, and things happen without having to explain it.

The Pink Professor is parked on a wooden chair by the southernmost pool table, casually sitting on it with the back of the chair as the front. Some tough guys are playing a game. And he's a part of the conversation on the ways of love, because there's always some kind of talk about how "easy" someone is, or how "hot," or whether someone's breaking up, "dumping," "ditching," "giving the old heave ho," etc.

The conversation goes on, then the group hears a knowing chuckle, so they look down at a very delighted Pink Professor. They want to know what he's laughing at, and he says he's not really laughing at anything, just laughing with something. Because, he explains, what he's thinking about is "the biological impetus" always at work in their midst. He explains a little of what he means and how it's ever been and shall always be.

The biological impetus is a term for the congeries of conscious and unconscious desires and drives ever present in the behaviors of mating habits and rituals. The impetus goes back to the beginning, when time itself was young. And it's with us today, regardless of style and the superficial shifting of culture.

He stretches their credulity a little farther, explaining that that's why pornography is so boring: Not enough variety, unless you're part of the action. The impetus isn't to watch other people's boring body parts go through their motions, but to be part of it. When the action's happening with us, it's all quite interesting. Even the smallest protozoa is interested, hanging out in its equivalent of a bikers bar looking to get lucky. And the guy just getting off work at the car fix-it place up the road, sneaking in for what he might find, is no different.

The Pink Professor glances over at the bar, where Waitress Exhibit A is doing an "innocent" tushy wag not going unnoticed by the guy standing at the jukebox. In an instant, the Pink Professor has connected the dots, knowing how it will later end ... He muses over a snippet of T.S. Eliot's "The Wasteland":

Flushed and decided, he assaults at once;
Exploring hands encounter no defence;
His vanity requires no response,
And makes a welcome of indifference.
(And I Tiresias have foresuffered all
Enacted on this same divan or bed;
I who have sat by Thebes below the wall
And walked among the lowest of the dead.)

It's not that funny, of course, but the Pink Professor smiles nonetheless, a wistful, forlorn smile that remarkably combines a strange look of deep concern and bemused blitheness. And you really have to have an understanding face to do that. One of the first mates of the Roadhog sees this strange look, that usually accompanies a bout of diarrhea, and asks if anything's wrong. "No, Tony," he says as he tries to shake the poetry out of his system, "I'm fine. Thank you for asking." Kind to the end!

It's an old old story, very old yet new as tomorrow's clipped up newspaper, the things we do for love and the drives that make it happen.
Posted by dbkundalini at 7:20 AM