A WEEK ON THE TEACHINGS OF SRI MASTURBANANDA (3) 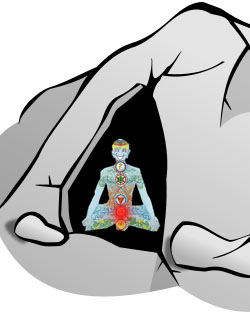 The yogi alone in his cave is something we all can picture. It's an inspiring image, an exalted being who's found a hole in the midst of a rock and has climbed in there for his meditations.

We're picturing Swami Sri Masturbananda today in a cave like that, but we ask that you realize it's for illustrative purposes only, as he doesn't actually like caves. Too many inconveniences and a lack of creature comforts. You've got bugs, spiders, bats, bears, and the occasional hobo stumbling in to sleep off a bender. For these reasons and many more, and remember, Sri Masturbananda is all wise, he prefers the warmth and comfort of his own ashram, where his personal bathroom is all the "cave" he needs.

The message we want to focus in on today is not where your alone time is found -- a cave would do nicely if you don't mind roughing it -- but that you get away somewhere, and that you spend a lot of quality time meditating the Masturbananda way. Pull away somewhere alone, then pull away.

Frankly, it's left to our imaginations what precisely he's doing in the bathroom. We feel we have something of a good idea what's going on, but how he manages it every step of the way is what we're not privy to. And certainly we're not privy to the extent of his consciousness, what his experiences are in relation to the divine, and what all revelations are granted him in those seconds or moments of complete release. Just going by the sound of it, he must be creating new worlds in other dimensions!

I myself, as one of his disciples, meeting him in Mother India, came about as close as anyone to witnessing his ecstasy, being allowed to sit outside the door. I summarized it a couple days ago, but just to touch on it again briefly, to say his meditations are turbocharged would not be an exaggeration. I like seeing things in person, I really do, but if that's not possible, my imagination is fertile enough to fill in the blanks. I could tell you in very explicit terms what I believe it sounded like, but I'm trying to keep this blog family-friendly. Nothing "blue" allowed. So just let me say, if he's experiencing what it sounds like he's experiencing, the whole thing is very hot, and copious. This guy's a jackhammer.

Of course as an avatar sent with an important teaching for us in the world, he's not simply here for his own awareness, consciousness, and enjoyment; he's here to lead us all in the way of life. This is where he's different from so many other teachers, who teach the way of asceticism and years of long, unfulfilled searching. Sri Masturbananda declares that the glimpses of the highest consciousness he has are for every man, through using wisely (and regularly) the equipment our Creator gave us.

For that purpose, we all need plenty of alone time, to meditate and to receive those times of blessing, the flashes of divine ecstasy in the precious seconds we have. The master retires to his bathroom or some other retreat -- he would go to a cave if that's all he had, despite the bugs and other inconveniences -- and there he is vitally in touch with the glory. If it's important for such an advanced being as Sri Masturbananda, how much more would it be for lesser men!

And the master is one who counsels us in that. He doesn't just leave us alone to our own devices; he gives us counsel to seek out those alone times, even saying, in his grace, that we should cherish our time alone. Because, guess what, we're not really alone. The center and heart of the universe is everywhere, right there where we are. It is a work of grace that we're able to ascend as we do, ever building toward that full release, then to find it, even if it's just for seconds. We see it -- we feel it -- the ecstasy at the heart of life, whether it's for seconds (or eternity).

This is what the master wants for you today!
Posted by dbkundalini at 9:27 PM