Masturbananda -- Heaven's Just A Fantasy Away

A WEEK ON THE TEACHINGS OF SRI MASTURBANANDA (6) 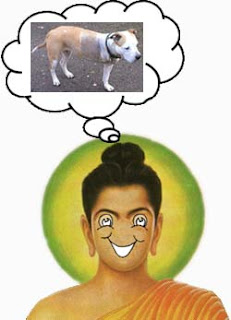 One of the important teachings of Swami Sri Masturbananda concerns the connection between thought (or fantasy) and reality. They are in fact the same thing. We may tend to think of thought as insubstantial, not as "solid" as an object in front of us. But obviously everything we create starts as a thought.

That's not too far from Masturbananda's philosophy! Ultimate reality, as though there could be any other kind, wants to get it on with you. You and it are, in fact, already together as one, but as long as we're unaware of it, we're trapped here in suffering.

The master's ultimate purpose is to make this connection fully conscious, joining the divine realms consciously with our daily experience. And so we have the revealing of the divine in our bathroom meditations, with Sri Masturbananda leading the way. He teaches us that there are really no limits, but with our limited perspective, for most of us, we're going to have to be content with glimpses through these ... personal activities.

There's a funny story of an innkeeper in India who was looking for a way to make more money. But he wasn't just content with a fair profit, he wanted to make a killing. Young men were working in the area, harvesting whatever they happen to grow in India, and came to stay at his inn. Knowing how they'd like to unwind at night, he stocked a room with particularly provocative magazines. But instead of charging the cover price, he jacked the prices up threefold.

One day Swami Sri Masturbananda passed that way and, stopping in, naturally wanted to browse what the guy had available. But seeing the crazy ridiculous prices, and knowing in an instant the guy's perfidy, he made a purchase. Then he went to his room, then straight to the bathroom. The master started fantasizing -- joining his unlimited thought to the equally unlimited divine creativity -- and, as it turned out, he left the hotel so full of his glory and effulgence they needed the fire department and all the fire hoses they could supply to clean it out, which left such massive damage the proprietor declared bankruptcy, then finally killed himself.

How did the master do this? It was thinking. And knowing that Heaven's just a fantasy away.

For us, there's also a place in our thinking where we're able to "let go." But you know as well as I that we spend a lot more effort observing our thinking as almost a third party, and so there's blockage. We're opposed to ourselves. Sri Masturbananda's program is that we come to realize the true connection we have with the divine, then live totally according to that awareness. But he recognizes where most of us are, far from the ideal, and so he teaches the physical release as a primary experience. Those are the glimpses of the divine that are meant to lead to so much more.

We see it all around us, nature and ourselves going after this connection. We observe: Even a three legged dog finds a mate, so obviously there's nothing really standing in our way, except ourselves! Sri Masturbananda wants us all to advance as far as we can, with our thinking leading the way ... then getting out of the way!


ON ONAN AND THE ISM NAMED FOR HIM

The biblical character Onan is well known for his bedroom activities, and is the patron saint of many. But the story as we typically hear it focuses on his death. This is where Sri Masturbananda disagrees. Instead of a physical death, the master interprets it as a death to limits and expectations. Onan, quite remarkably, was going beyond, dying to this world and the limitations of consciousness. He was going for greater glimpses of glory. And as it turned out, it was all for the best, since whatever kids he would've fathered would've been nothing but horny profligates anyway.
Posted by dbkundalini at 2:02 PM