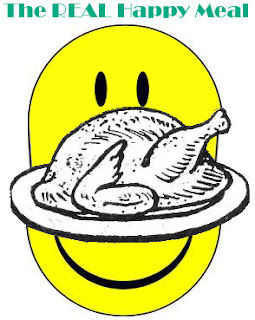 It's soon almost going to be that wonderful day, when family gathers from far and near to eat the stuffing out of the turkey. Of course I'm talking about the holiday known as Thanksgiving, commemorating the time that the pilgrims first did it.

We're more blessed in that we have more modern conveniences than they had. We go to the store to get the turkey that a slaughterhouse has killed rather than having to pursue one through the forest, making a bunch of turkey noises with a turkey call. Actually, I knew a guy who hunted his own turkeys, and the way he described it, you have to sit there very quietly because a turkey has very sensitive hearing and is easily alerted to danger.

The pilgrims -- they had it their way. That's what they were used to and they didn't know any difference. It's weird for us to try to imagine life without a refrigerator or freezer, but at least they had the advantage of never knowing any difference. So it looks like, once again, ignorance is bliss. But put one of us out there, nothing but a blunderbuss and no idea how to use it, and we'd show up at home with nothing and the kids would be sitting there hungry.

Fortunately, we've made progress since those earlier, darker days, of which I don't know much more than that. They were used to a lot more hardship that I'm frankly glad isn't typical for the general American populace. They had a lot of family and fellow travelers dropping dead on the boats just to get here, so how any of them kept their happiness ... it's beyond me. They were coming here for religious reasons, right? So they must've done a lot of meditation to keep up their spirits. And maybe they were visited by a hedgerow of warring pilgrim angels so that at least a remnant might survive. That'd be something to be thankful for.

Anyway, the family gathers for this important day of chowing down. Everybody brings something, maybe a cranberry salad, a basket of buns, a pie. And we pool it all together on one big table -- sometimes a second table for the kids -- and we realize that we've all got it pretty good. Still, you have to think of the hardship those other folks went through -- the pilgrims, the death -- and realize it could happen to any one of us. After all, we look around the table and we can picture the faces that aren't there from bygone years... We're all going to die.

Do I really mind the facts of mortality that much? No, I really don't. I'm not crazy about the idea -- don't get me wrong. But what can you do? Nothing. I actually use the facts of mortality to try to stretch out my lifespan. Like this, I don't engage in dangerous behaviors: criminal activity, risky friendships, interpersonal relationships with people when I don't know where they've been and what they've been doing with it, which includes everyone. My basic philosophy is: Be happy with a normal life, with a serious substratum, admittedly, of Sit quietly until you die.

We do that at Thanksgiving, everyone sitting there, thinking the same thing. All those people who used to sit around this table aren't here anymore. Could I be next? Lord, is it I? (The kids' table isn't like that ... they're very happy.)

I see the general run of kids playing at McDonald's when I'm there. They've turned the restaurant into a playground, and it's very loud in certain sections. There was a crowd one day, so I was sitting right next to the playground entrance, which turned out to be a terrible place to eat. It made me think, we ought to make a pact with the parents that they wouldn't allow their kids to go to the McDonald's playground because the rest of us want to eat in peace. If we could just persuade kids that they need to sit quietly till they die, the world would be a nicer place.

But, no, there they are, with their little Happy Meals, taking a few bites, then running off to the playground. They definitely don't have the pilgrim spirit. In 1600, they would've been dead the first day!

Thanksgiving, whether these little hellions know it or not, that's the real happy meal. So sit there quietly and eat it!
Posted by dbkundalini at 7:06 AM