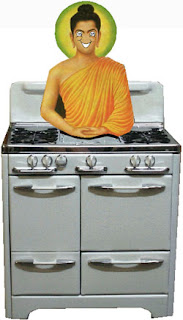 Of course it's a terrible feeling to be stoved up. Whether it's, say, something to do with going to the bathroom and you're taking laxatives, or anything else. What else it might be, that's a good question. I'm sure if I turned my mind to such a task, I eventually would think of some other way a person might occasionally be stoved up, especially if he's a guy.

As to women, whether they ever get stoved up, frankly I don't know. If any of them do, you'd have to assume they'd have to be ... what my cousin used to call ... nymphomaniacs. I've honestly never met a nymphomaniac who's ever made her condition known to me, and the way I heard it told, if you ever meet one you'll know it! There's something obviously wrong with them -- they've got some kind of issue, if they can't restrain themselves and hang out with the other women who can. I never met any women who were much of a go-er, if you know what I mean, although, of course, my own grandmother owned the book "Sex and the Single Girl."

Men restrain themselves all the time, without trying to be too graphic about it. Asceticism, trying to please the Lord. Or because they've got a big date on Saturday and don't want to take chances. Trying to please the Lord is probably one of the biggest reasons men get stoved up. Because we instinctively know, through years of conditioning and acculturation in church, that it's a no-no. Although, suspiciously, it's one of the things they keep fairly hush hush. I don't hear too much criticism of it, for whatever reason. About the only time it comes up, now that I think of it, is if some naive 12 year old boy asks about it at the Youth Rap. The leader doesn't chuckle or anything, but you can tell he's uncomfortable with it. He's got that verse about looking on a woman with lust in your heart.

There is a guy at one of the churches I know, Pastor Wadd, who is quite vocal about anything having to do with sex. His big specialty is counseling men (and women, if he ever finds any) about sexual addictions. You know you're addicted if things get out of hand, or perhaps I should say, if they don't get out of hand. And if you're living hand to mouth, of course that's worse, because either there's two involved or you're a very agile contortionist. Anyway, Pastor Wadd is so strict about sex, you'd just love to ask him what his own experiences are. But it'd probably turn out that he's clean, like most of the pastors I've heard of who are concerned with what goes on in other people's bedrooms. I heard him say one time, "I'm happy to address such a large group of horny sinners." It's a great icebreaker.

I was at that meeting. And some guy, who should've known he wasn't going to get anywhere with Pastor Wadd, boldly stated that he'd heard that regular male sexual activity, they say, helps prevent prostate cancer. Of course he thought he had the old boy right where he wanted him, but the pastor deflected him in a great way. He said, "I believe most of us would rather take a chance on cancer to avoid certain shame." And that's not a bad argument. That's also why he doesn't think we should drink wine; there may be a chance we'll avoid heart troubles, but the shame we'll get is certain.

Well, I'm torn on some of this. Because Pastor Wadd is an influence, being a local holy man. But my guru, Swami Sri Masturbananda, over in India, has a whole different take. As you'd probably guess, he's never stoved up. I'd bet there's not a newborn baby with cleaner pipes than this old guy. If there's a flake of plaque buildup in his proximal vas, I'd like to see it. Especially with his well-known fervor and vigor. This is the guy who blew the bathroom vent fan off the top of his house! No one can look on him in his heat and live!

Sri Masturbananda and Pastor Wadd, remarkably, have the same goal, the experience of union with God. But if I had to choose which is the more conventional of the two, it'd have to be Pastor Wadd. Because Masturbananda is unusual even among other gurus. They're noted for teaching asceticism, or if that's not entirely accurate, saying we should "transmute" the inner energy of the vital essence, etc., which just sounds like a fancy way of saying it's a no-no. They believe stifling nature leads to the super-nature, debatable.

The swami doesn't believe that for a second. Because, just to recap, he knows most of us aren't going to get to the fullness of divinity for at least a million incarnations. Giving us plenty of time to suffer. And so, to relieve suffering, and, amazingly, to show us glimpses of the highest consciousness here and now, he encourages us to follow him in these blessed acts.

It must work. I don't really know if Pastor Wadd is ever stoved up. I would guess his wife helps out around the house. But one person I know isn't stoved up, and that's the blessed master.
Posted by dbkundalini at 8:30 PM