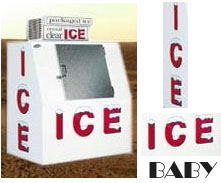 I'm seeing some of the craziest stuff on TV. We've got an infinite number of channels trying to fill an infinite amount of time, so naturally anything goes.

I think it was on yesterday, a show on the Travel channel about the "most unique" McDonald's restaurants. The crazy thing about it was that they featured an expert on unique McDonald's places and things, a guy who's made it his mission in life to visit every McDonald's. He's already been to around 12,000 of them. Of course he has lots of stories to tell, and there was a TV show this one time, at least, that featured him.

He looked normal enough in all the typical things you look for, eyes, head size, etc. But there he is, going nationwide and around the world, looking for the elusive good meal at McDonald's.

It made me think of other fanatics, what I might be able to do to be featured on one of these Discovery-type channels and all their feature stories. Definitely going to McDonald's is now out, thanks to you know who. But you could have a guy who goes to every adult bookstore/movie place in existence. That would make a fascinating study, since you figure there's going to be less and less of them thanks to the internet. Probably the best place to find them would be where truck drivers go, the interstate. And even there, with 3G/4G network cards, we're going to lose a lot of these little pieces of imagined paradise. Anticipated paradise, anyway, although ultimately disappointing.

Just let your mind wander ... there's all kinds of places you could be a fanatic and an expert about. Fast lube places, oil change stations. The biggest drawback would be you don't get your oil changed as often as you eat. Plus it sounds very boring. I was driving around today and saw an ice machine and thought maybe that could be my specialty. Everywhere I go having my picture taken with the ice machine. Then let's say I've got 12,000 visits to ice machines -- and there have to be more ice machines than McDonald's -- and the Travel channel has a story about ice machines, guess who they're going to come to for information. I'd have all the specs, my favorite kind of machines, etc.

One thing that would be interesting in this subject is the "ICE" font they always use. With snow and ice hanging from the letters. I'd love to know how many variations there are on this. It'd be interesting also to know what psychological difference it makes in ice sales to use an icy font.

But what I don't want to happen is, say I go to 6,000 different ice machines, then I hear there's already an ice machine guy who's been to 20,000. And the Travel channel people contact him ... and I'm left out in the cold.
Posted by dbkundalini at 1:10 PM