The Pink Professor Explains A Game Of Pool 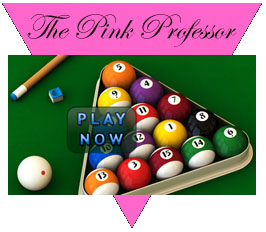 Before you go to play a game of pool, it helps to know what you're doing. In fact, if you don't have any idea about what you should do, it would be unlikely you'd ever take cue in hand to break and possibly to scratch. Oops, I'm getting ahead of myself! Because of course you're not yet familiar with the specialized vocabulary necessary to the game.

To get the job done, you need a teacher. It's like so many other things in life -- raking leaves, turning on a gas grill, changing the oil in your car -- it helps to have someone who's done it, who can then show you how to do it too. As for me myself, I both grew up playing pool, getting it somewhat by osmosis and somewhat by instruction, and I took a class, receiving the expert instruction of a stubby guy who picked it up in tough Chicago or perhaps the service.

There's a place, though, not far from where I live; you have to veer in and out of dense traffic to find it, but it's out there nonetheless; where, if you're lucky, and if you happen to go there the right night, and you chance to survive any missteps along the way, you can learn the game, meaning one of the more popular games that is played on the pool table.

But there I go again with the terminology! A pool table is a table-like thing that typically has a green felt surface, with holes in the corners and two on the side. A set of balls is placed on the surface, and with a stick called a pool cue, the balls are hit. To get the balls in the holes is usually the object of the game.

The place I'm talking about, where you can learn to play, is a local hangout that is a bikers' bar. But you need to get there on one of the nights when one of their patrons is there, a guy they call The Pink Professor. Because -- unless they've changed -- nobody else there is going to care whether you know how to play or not. The others will be too busy playing themselves, pool or some other sport that might, coincidentally, involve a hole in each corner and two on the side, to be of assistance to you. And my advice, just good advice, if you see any of this extracurricular action taking place in the corners, that you step back out of the facility, do not advance any further, and get the heck out of there!

OK, The Pink Professor. I've mentioned him before. And here.

Someone shows up wanting to play pool, but they've never done it, they have no idea how it's done. If the PP is there, he'll get you familiar with the sticks, he'll help you warm up with a few whacks. It's good to warm up, because in the heat of the game it'll be assumed you know what you're doing.

As he patiently explains, the balls are set in place with a triangular form called a rack. Then they're placed in a particular place and the rack is removed. You put your cue ball, the white one, in a region called "the kitchen." Now you have your pool cue, and you're going to hit the cue ball toward the other balls, that it will hit them. That is called "the break." And the lessons go on like that!

A chair comes flying across the room. There seems to be some mix-up in one of the corners, as a rowdy biker's hands have accidentally found their way to the topmost part, below the neck, of some other guy's woman. A broken bottle suddenly comes into view, being freshly broken at that moment by a sudden downward parry against the edge of the bar. You duck for cover just as you also take a stroke at the balls, scratching, which means the cue ball goes into one of the holes.

The Pink Professor goes over and quells the struggle, explaining that in the darkness and with the over-drinking, that mix-ups with women and the men they love are bound to happen. "No harm, no foul," he explains to the principles, getting them to put down their shivs long enough to shake hands and make up.

Then he's back to teach you the essential rules of what you're doing. That in this particular game you have to hit the balls in consecutive order, calling each shot, etc. And that if you're successful -- and sometimes success takes a little practice -- you will be the winner when you finally hit the 15 ball in ... last of all.
Posted by dbkundalini at 7:33 AM