A Live Turkey At The Restaurant 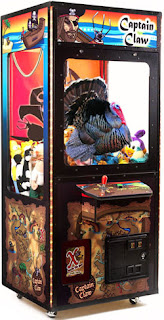 This is an undoctored photo. No doctors were consulted in the making of it.
----------
I was at the restaurant yesterday, which was busy. So I got to spend some time in the waiting room. Even though there were plenty of tables in plain sight. I was there so long, I expected a nurse to call me in for a urine sample.
----------
I started observing everyone. There was a guy right by the cash register, waiting for a refill on his coffee. He got the refill and immediately went into the bathroom. I thought that was odd. Why not let the waitress get the coffee, tell her he's going to give a urine sample, and he'll get the coffee when he gets back? I wouldn't want to take my drinks into the bathroom.
----------
Maybe Karen and Richard Carpenter were there. After I waited for a while, the hostess called out "Carpenter." At first I thought of the Seinfeld episode where the Chinese guy calls out "Cartwright." My name isn't Carpenter. Then I thought, maybe the Carpenters are here. Maybe I'll see the late Karen Carpenter come by, asking me if I thought I'd be out there long, to which I could've said, "We've only just begun."
----------
After a while it was Standing Room Only in the waiting room. In fact, there was a 10 minute wait just for a bench.
----------
Someone had put a live turkey in the arcade claw machine. That was weird. A live turkey as a prize! But it was a moneymaker. Kids kept dropping the claw on its head, but it gobbled in alarm and pulled away. It was disgusting. It was getting turkey droppings all over the other toys.
----------
I came up with a pun for "peeing up a storm," which was hurinecane. The guy with the coffee made me think of that, since coffee has that effect on me. Being in the bathroom with the coffee might not be such a bad idea.
----------
I looked outside and saw a couple yellow motorcycles speeding by. It reminded me of a show I saw on TV about a guy in Israel who robbed banks. He'd speed away on a yellow motorcycle. It took them forever to catch him. So I was crying out, "It's that Israeli!" But everyone looked skeptical. "No, it is really!"
----------
I heard a waiter asking a customer, "Did everything come out all right?" I thought that was a little personal.
----------
I also came up with a syndicated cartoon strip (potential) that involves side by side graves.
----------
That's Earl, brother!
Posted by dbkundalini at 7:30 AM