A WEEK ON THE TEACHINGS OF SRI MASTURBANANDA (5) 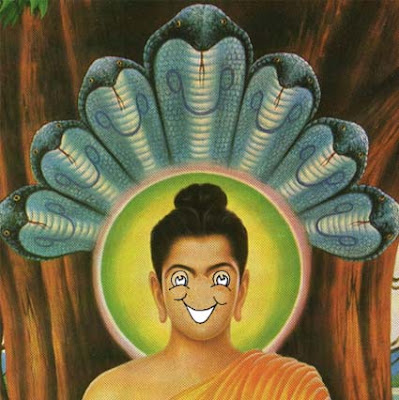 This posting covers some of the advanced principles of metaphysiology as experienced and taught by Swami Sri Masturbananda. In brief, the body we see is actually made up of seven bodies. Each can be discerned and known simultaneously and dealt with as part of our spiritual connection to the divine, our true Self.

As the master has taught repeatedly, the basic premise to grasp before all else is that everything you think you see and know about yourself is false. Once that's dealt with, there is so much to discover, to be revealed, including these teachings on the various bodies that make up the persons we are. There's seven of you! There's a seven-link chain, so to speak, between yourself and the highest consciousness. And the higher you go, the more ethereal and sweeter everything is.

Sri Masturbananda, of course, has known all about these dimensions for a long time, being an avatar of the Highest and yet living on this plane, with the mission to lift us all toward our ultimate destiny. In his teaching and his manner, he is all gracious, knowing that most of us will not accept much, and hence will not achieve much in this incarnation. So he generally keeps his teaching down at the average man's level, revealing only glimpses of divine consciousness through self-gratification. That's not to say he himself doesn't enjoy it; he enjoys everything, especially that.

Whether it's the lowest or the highest, Sri Masturbananda is quite at home in all of it. It has a genuine stimulative effect on him. But naturally he is most at home, and most stimulated, in the highest realms, when he has the fullness of the seven bodies unsheathed. Because then he can dwell in the sevenfold ecstasy, and revel in it, with all the planes operational. His desire is that each of will get this, and know our full nature.

In the illustration, the seven snakes represent all these bodies. Please don't write in with a lot of fears for Sri Masturbananda's safety. He is not -- we repeat, he is not being attacked by snakes. That's just Number 1, 2, 3, 4, 5, 6, and 7, representing the sevenfold Self!

The imagination tries to picture seven Masturbanandas all at once, finding himself, reaching out to his other selves, going at it with his typical jackhammer speed, with the understanding that we're dealing with heavenly beings -- It's got to be raw. In such a setting, the ecstasy, the climaxes that are taking place are beyond our imagination. He did tell me that the more heavenly the body, the more heavenly the flow. We start at our plane, with the natural fluids. Then as the bodies progress, so this aspect progresses. Going up the line in order, from earthly to heavenly, we have 1) our natural fluids, 2) nectar, 3) amrita (some kind of ethereal sweet stuff), 4) soma juice (more ethereal and sweeter yet), 5) double soma, 6) soma ultra, and, 7) pure spirit (so ethereal it's vapor and so sweet one drop causes diabetes).

Anyway, you're giving and you're taking. You've got a handful of this one over here, bodies that are more or less evanescent. Suddenly it's five on one. It's like the Trinity on steroids. This one's dematerializing and popping up somewhere else in the room, maybe reaching around behind you. You'd think it was a hall of mirrors, with so many images of yourself, but some of the bodies of the higher planes resemble you somewhat less, as they're prone to burst into a sort of heatless fire and vanish. One thing's for sure, it's all quite enjoyable. You're literally beside yourself with pleasure...

I could give step by step instructions on how to achieve this level of awareness and ecstasy in meditation. There are really no yogic injunctions against it. And, believe me, it's truly a transcendental scene! But I don't want to bore anyone. Most people have had a hard day, or they've got a lot on their mind, and I know most of us don't want to be bothered with a lot of extraneous details, especially instructions that we don't necessarily have a lot of time to follow anyway. Frankly, most of us have enough to deal with with the body we see without wanting to worry about others. So I'll spare you.

Everything in its time. The teachings will come ... someday when you're ready. Because, yes, Sri Masturbananda is here to make these revelations and lead us all in it. He wants us all to know for ourselves the glimpses of glory, and to have the real experiences of divine consciousness.
Posted by dbkundalini at 6:00 PM