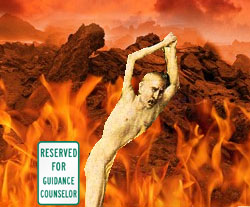 I've written before of my undying disdain for guidance counselors (Link 1 and Link 2).

The idiot we had at my school ruined it for all the others, unless, as I suspect, the others are all idiots, too. After all, how much intelligence do you need to send kids home with the counsel to think over their future? It might be nice if you gave them a few pointers, you know, guidance and counsel. It's kind of like being a soda jerk, if you're not jerking sodas, what are you doing? You can tell I'm mad, that's when I use the italics.

I remember sitting in my idiot guidance counselor's office for some reason, like several times. It was kind of like a place you sent kids when you didn't want them disturbed, because no one ignores you like a guidance counselor. I can't believe I'm still mad about this guy 40 years later, but hey... If anyone deserves my disdain, it'd have to be him.

My above links on this idiot are from 2009 and 2010, respectively, and now it's 2011, so maybe I'll make it an annual thing. One day every year to dump on this idiotic creep from my childhood. I should find out where they buried him, assuming he's now physically dead in addition to being mentally dead. It might be well worth a trip to his burial site, of course after having visited every strong coffee shop in town and filled my bladder with the biggest bladder-busting fill of coffee there's ever been. I'll leave it to your imagination where I'd relieve myself, but I'll give you a clue: It wouldn't be an ordinary toilet.

You know, when he told me to go home and think about my future, I wish I would've had the bright idea, Hey, why don't I be a guidance counselor? He probably had the matchbook somewhere and I could've gotten the college's address. Then I'd show up and blow the whistle on the whole stinking place, a guidance counselor mill that's been putting out mongrels instead of professionals. Give 'em their shots and send 'em out to an unsuspecting school. Next thing you know, everyone's aptitude stinks. You had aptitude all your life, but as soon as the mongrel shows up, you're a dullard.

I'm not a dullard. Good grief, I've had some smart moments in my life. Look, I know how to put sentences together. And it's not because I'm just a run-on talking guy. There's such a thing as the gift of gab ... and there's such thing the curse of gab. I don't have either one, but if something needs to be said, I've got the mouth and the brain to say it. I don't know what the guidance counselor had on his mind. I'd love to ask him, but I'll never get the opportunity, because hopefully he's dead. And where he went, I don't plan to go. Naturally I'm talking about Hell. And that'd be a drawback to pissing on his grave, since I don't want to douse any flames that might currently be licking him.

I really should look up the scourge. I seriously don't know if he's still around. If he's still around, I could show up at his house and say, "Well, the future's here. I've been doing a lot of thinking." Of course he'd look befuddled, like Who's this guy? Always the one for individual attention, huh? Can't remember me?

In all fairness to him, and I said something like this in 2009 or 2010, one of the links, and as a contradiction to what I said before about guidance counselor mills, no one really goes into guidance counseling. A teacher-type person shows up at a school. They give him a contract and if they notice he didn't read the small print, they slip in the additional paper where he's surreptitiously designated the school's new guidance counselor. By the time he realizes what he's done, the ink's dry, and he's legally bound to it. He looks around the room for help, but all of them are patting each others' backs and laughing, "Too late, sap."

But then, he goes and reads up on the job. How hard could it be? You could easily schedule each kid in school to come to your office for five minutes. That'd give the appearance that you were doing something. Just put them off as best you can. What difference does it make? A high school kid doesn't know the whole thing's a scam. And by the time they graduate, it's too late for them to do anything about it. Maybe a truck will run over the kid and no one will be the wiser...

UPDATE: Guess what, I googled my guidance counselor and he did die, a few years ago. They cremated him, so he got a jump start on the flames. The obit mentioned he was a guidance counselor. No mention of the human wreckage he left behind.
Posted by dbkundalini at 5:21 PM