The Test Of Time 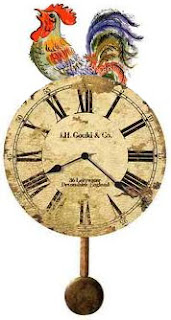 With Daylight Saving Time, once again we see how illusory time really is. Suddenly an hour doesn't exist. Time is a fiction. You could literally be born last night and 99 years old tomorrow if the government said that's how it was.

Everyone complains about time but no one does anything about it. That's true. I'm feeling every ache and pain of my many years, but you'll notice I still accept the fact of those years. I haven't decreed them gone; they are neither destroyed nor renewed. I wake up, notice I'm a day older, and live with it.

And yet someone somewhere, our governing officials, actually have the means to change time. They could declare us all 50 years old and never have to pay Social Security. That'd save money. But for the rest of us, unless we run for office and are able to get our hands on the black box with the official clock, we just sit here and take it.

Here's something to think about: If time itself is a fiction, what does that make the phrase "The Test of Time"? We say something stands the test of time, and that's supposed to mean something. It means it stood the test of time. Which means a certain amount of time passed and it's still here. Standing and looking good. Looking good, or looking adequate for the task, is part of it. There's a lot of things that literally stand the test of time but they don't look good. Old houses, old cars, Gov. Jan Brewer of Arizona...

Before any more time passes, and assuming the government doesn't suddenly turn us back an hour and none of this actually happened, without further ado, let me state something else about the test of time. Even though things do stand the test of time, time still goes on and for the most part they're going to eventually fail the test. Or will they? The pyramids are a great example of standing the test of time. The big advantage they have is they're built of rock, not bamboo. So it's not quite as tough to do. But I'm thinking even they someday might crumble and fall; I know, it's going to take trillions of years. But before trillions of years get here, they have to somehow survive the destruction of the earth when the sun becomes a red giant. But it's not too hard to imagine them floating in space, looking for another planet with an Egyptian climate.

I've been thinking about writing my memoirs on toilet paper. Do you think they'll stand the test of time? Of course not, because toilet paper is flimsy and given to early destruction. But I forgot to mention, I will also laminate it as I go along, and that'll give it more durability. I haven't looked it up lately so I don't know how long laminated toilet paper lasts. Just as a side note, it might be a good way to save on toilet paper. Buy a roll, laminate it, set it by your toilet and just keep reusing it. You'll need to clean it, though. For that I recommend paper towels.
Posted by dbkundalini at 8:47 AM