The Virus That's Me 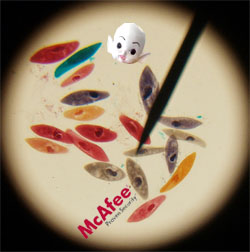 The McAfee virus scanner suggested installing itself today while updating Java. I don't usually update Java because I had a few problems with it in the last couple years saying it's already installed. But there was McAfee, even though I already have Norton presumably doing a good job. There's something incongruous about a virus scanner being sneaky.

Today, though, I'm thinking of the virus that's me. I'm coughing occasionally -- hopefully on the healing side of bronchitis. The doctor didn't think it was bad enough for antibiotics, but I got some other meds. Which are about gone, although I still have some bad moments. Yesterday was bad for multiple coughs and distinct balls of phlegm right out of my lungs.

A few massive coughs in public and people might not want to be around me. Except they cough once in a while too (I haven't heard any yet but I'm listening to music with headphones, Yoko Ono's "Yes, I'm A Witch.") But I'm hoping everyone around me may be socialized enough to withstand any disease I may have.

I'm such an average person my diseases must be average too. I hear kids in daycare are better off if they're around sick kids. And I haven't always been alone.

Still, I feel funny about blowing my nose on a tissue or napkin and leaving it behind for a waitress to dispose of. I hope when they do they wash their hands. 1) They might be passing my germs to someone else. 2) They may have passed on someone else's to me before.

We're in a socialized environment and there's no real safety -- except just to face it boldly. I don't use bacterial wipes at the grocery store anymore. It's such an arbitrary thing since there's a million other things I'm touching, gas pumps, books in the library, etc. The fact that I wipe my mouth or nose then use these things suggests to me that everyone else does it too.

Another fact is I don't get sick that often. So I've been fortunate, or socialized in the right way. I'm not a boy in a bubble.

Am I a virus for society in other ways? Not really, I'm not doing anything society can't handle. It's been OK so far. Among the other reasons I'm not a virus to society are, 1) I want to be a credit to my family; and, 2) I'm saving my viability for some possible future now indistinct. But for those two things, something could be unleashed that would sicken the whole world.
Posted by dbkundalini at 12:10 PM