Meditation On A Brick 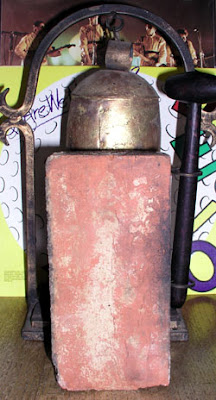 When I meditate, generally, it's very much a scattered thing. I can't do the one point, staring at a candle thing. I have to let my unruly tamasic (and proud of it) mind wander. I only wish I had more time to do it, there's no telling the hidden things of life I might uncover, then keep to myself so they wouldn't be misused.

So my meditation on a brick, which I'm typing out, won't be any different. Not only that, but my meditation session has already been interrupted! I just remembered an appointment I have across town. So I have to leave the brick here on my desk and go away. Meaning the next thing you read in this post will be some hours later -- and the spirit of this moment will vanish, and the whole thing will be crap.

Some minutes later -- I went to the bathroom and got my notebook, etc., so I'm more or less ready for my appointment, giving me a few minutes to get some of the preliminaries out of the way here. Still, there's not time to really engage myself in actual meditation on the brick now.

I will mention where the brick came from and the photo of it. First, the brick is from a place I used to live. They were tearing it down some years after I'd moved, decades really, and my mother was driving by and saw what was going on and went in and got me this brick. She also kept one for herself, which, who knows, I might inherit someday, if I outlive her. So that's where the brick came from. I'm happy to have it, too, for whatever reason. One thing, it provided a good foundation for me all those years ago when I was asleep inside the house. If it hadn't been for the faithful bricks at the foundation, I would've woke up to a pile of rubble every morning, with the house collapsed.

Now, about the photo. I usually get most of my pictures from Google pictures and mash them up a bit. And I thought about doing that with this post too. But then I thought, it'd make it so much more meaningful to me and the readers if I featured the actual brick. So it's almost like you're here watching me meditate on it. I arranged a couple other things for a background, mostly so I wouldn't have to clean up the room; I don't want you to see my clutter. So I have my sacred gong, that helps keep me from spiraling out of control. Anytime I feel insanity coming over me, I reach over and smack it lovingly. Or sometimes when the insanity strikes, depending on where I am, I might have to drive 50 miles to get home, darting in and out of the traffic stream and all kinds of craziness to make it. The worst thing that ever happened was I came to a closed interstate and had to shoot my car over the gap where a bridge once was. I came down with such a bang that the prism hanging from my mirror is still going back and forth. By the time I pulled into the yard, the car was wheezing, belching exhaust and flowing over with boiling antifreeze. But I still made it, rushed into the house, smacked the gong and everything was better. You can see why I'd like to stick it in the picture.

And behind that is my sacred first Devo LP. I still study the lyrics for clues to the world's demise. If it goes down brick by brick, you can see it fits the picture...

OK, I need to get going for my appointment. So I'll hope that I'm still in the mood to meditation on my brick when I get back. Till then! ...

Over two hours later and a family emergency later -- I've been thinking about finally being able to get home and meditate on this brick, and now here I am.

I drive by a building made of bricks and I usually think of how much work it was for someone to put all of them up, building the thing brick by brick. It's challenging to me, but I remind myself that they have always been well trained to know what they're doing. They're heavy boogers. But stacked up nice and neat, they make a nice house. You just don't want the mortar to go bad between them, because then everything could fall down. I see some rough buildings downtown, like when you're in an alley; the mortar's going bad, being there for a hundred years. An earthquake or tornado and it'd all crumble.

The Meditation Proper -- I'm acquainting myself with this brick. It is precious to me because of the old apartment connection. I found something the other day that I wrote about the elderly lady who lived downstairs from me. This old brick held her up too. As far as its physical nature, it's got a smear of paint on one side. Some of the mortar is on one of the broad sides. It's got some cracking on the other side. There was a lot of strain on it over the years, being pressed between other bricks, then holding the house. Plus, I was up several nights pacing the floor, which couldn't have helped.

What do I think of when I think of its interior? Something rock solid, yet made by man and not just by nature like a rock. At some point all those years ago, it was just a bunch of clay (or whatever), it was probably mixed together, then poured into a mold for hardening into its present shape. It's a very basic shape, which hasn't changed much all these years in the realm of bricks.

My meditation takes this kind of turn, to its longevity and the utilitarian nature of its purpose. It never came into being to be meditated on, that's one reason this feels so weird. If I weren't so crazy sentimental about things, I'd toss it in a brick pile somewhere and forget it. If I hadn't looked at the paint smear, I'd probably never have been able to pick it out from a dozen others.

But go way back, I was never that sentimental about the bricks of the house while I lived there. They were just bricks. When I moved out, I wasn't thinking, "I really hope they tear down this place someday and I get a brick from it." The thought didn't even cross my mind. Had my mother not gotten it, I would've never known the difference. In fact, I might've figured the house was still there since I seldom get to that town anymore. I wouldn't have been any the wiser. No one gave me a shingle, a board, a piece of a window, and I feel like I get along perfectly OK without it. Just this one brick.

One brick out of so many, why should I meditate on it? That might be just the reason, because it is one out of so many. Why did I get this particular brick? What twist of fate happened to put it in my hands like that? It's incredible that it even happened like that. And out of all the bricks, shingles, windows, and boards, this one was chosen. I don't know how. So it is worth meditating on.

Conclusion -- I'll spend some quiet time with it ... some other day.
Posted by dbkundalini at 7:41 PM