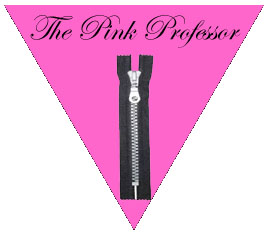 It's very hard for me to believe I'm already up to part 2 in this trilogy, it seems like I just started. And now I'm already halfway through. I'll need to somehow come up with longer trilogies.

Yesterday it had to do with a pillar, representing the sublime palace at which I found the Pink Professor in this particular fantasy. I had to undergo a series of labors in my quest to get there, including a challenging go at "The Magnificent Marble Machine" from the '70s show of the same name. Since then, I took the opportunity to watch part of one of the remaining tapes of this show that exist. It was worse than I remember, but the machine was just as slow as I remember. In yesterday's challenging go at it, believe me, it was a lot faster.

I've already had two digressions today. But let me assure you, these aren't counting against your time on my blog. I will indeed give you the full story of the fantasy I had (and am having) about the Pink Professor's open zipper.

Where we left off yesterday, there was this beautiful abstract garden statue representing a person, even though it's more or less a lump, that became the Pink Professor on his throne. I was dazzled by his radiance. I wondered if I could approach.

But approaching wasn't something he wanted me to do at that moment, for I had the awareness that he wanted me to stand back and see the wonders in store. A throng of devotees was gathered in a semicircle behind me. I was in what I would call the center, looking directly at the Pink Professor. The throng was almost doing the wave, back and forth, but it was more like a wave that a flock of birds might do, in that it was essential movement, not consciously directed like you see at sporting events.

The Pink Professor would lift a hand and the throng would lift, swell, and relax. He would put up both arms and they were ecstatic. He stood and two devotees were so overcome with ecstasy that they gave birth. I took this as a sign of the Pink Professor's continued potency, which, I believe, he's able to maintain, miraculously, without resorting to Cialis or any of the other medications associated with male troubles. I prayed that he wouldn't thrust his hips, lest a second Big Bang get the present universe confused. Everything was that close to the edge.

Next, he retook his throne and pulled a pink coverlet over his lap. Two bevies of beauties -- a male bevy and a female bevy -- entered from the sides, doing a kind of 'Dance of the Seven Veils.' It built to a rather provocative climax, with both bevies lying on the floor, twisting and writhing, then thrusting themselves toward him. I felt a little jealous, knowing he could choose any of these youthful stallions and fillies. But that fear quickly left as he winked at me. Jealousy was the exact wrong response, since this was meant to show how much he preferred me as his consort, with the whole world to choose from. I fingered him back a personal Kornfield Kounty salute.

The bevies exited stage left, and from the opposite direction in came serving men and women with bowls of precious candy and sweets. They proceeded to the throne in beautiful harmony with the bowls as their offering. I was impressed when the Pink Professor took an antibacterial wipe and wiped his hands before reaching into the bowl. Germophobes to the end!

What happened after this was something straight out of the biblical book of Revelation. An emissary from normal earth came in and was in mourning clothes, sackcloth, accompanied by an angel. He asked the angel, "Who is worthy to unzip the Pink Professor's pants?" But none was found worthy among the gathered throngs, and we sat in hushed silence for a half hour. I pulled out my Kindle and read.

Then, finally, the angel pointed a bony finger at me, and proclaimed, "He is worthy!" The silence was broken in a dramatic way as the thunder of a thousand mountains sounded. I stepped forth over what now was a glassy sea, full of eyes, representing the hushed hopes of all creation. With boldness, I pulled away the coverlet, took his zipper thingy between my fingers, looked up and winked at him, and immediately pulled it down, with firmness, until his fly was completely open.

There was such a rush of wind and radiant light that I was pushed back from the throne, but everything was very gentle to me. A second throne rose up from the floor and I was seated directly in view of the Pink Professor.

What followed was a hypnotic sequence that still -- and these memories are only minutes old -- makes me dizzy. It's a good dizzy.

I looked at the gathered throngs as these scenes unfolded. I could see their beautiful bodies through their garments. They were youthful and vibrant, but they became old, then turned to skeletons, then were restored to their original firmness and youth. They smiled, they frowned, they laughed, they cried, some of them were on their backs spewing upward like fountains. Fountains of life covering and nearly drowning them.

They and I watched with amazement as all manner of delectable things flew forth from the Pink Professor's fly. At first it was like a candy store, with sweet sticks of candy poking through and flying forth, all the best flavors, horehound, cherry, root beer, etc.; following were black and red licorice, then an enormous wad of taffy, 40 feet long, enough to feed an army; a candy cane the size of a telephone pole poked out and flew through the room; the biggest Christmas stocking in the world, like you see in convenience stores, pushed out and flew forth to the four corners, teaching everyone the true meaning of Christmas; but I was thoroughly amazed at what popped out next, Glenn Miller's actual trombone, which I'm going to sell on eBay; and finally he shoved out an rainstick the size of a Sequoia. I love rainsticks.

I looked up at the Pink Professor's face. There was a bright star shining out of his forehead, his eyes were like stars, his head was tilted back, he was in a perfect realization of ecstasy. This is the guy I love! I thought to myself, "I've heard of massive orgasms before, but Glenn Miller's trombone?"
Posted by dbkundalini at 2:49 PM