Building A Race Of Supermen ... From Me 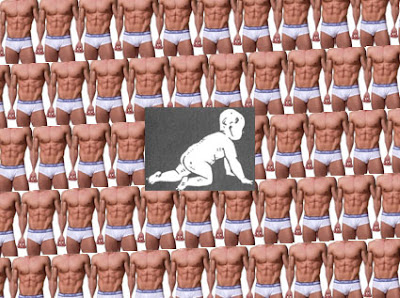 I don't remember how old I was when I first realized someone would try to create a race of supermen by using me in the process. I must have been around three or four. It was definitely before I started kindergarten, since this was the subject of the first note my kindergarten teacher sent my mom.

Where I got the idea, it's not as stupid as it sounds, it was thanks to reincarnation and my dad being a devoted direct disciple of a famous Indian guru. Other kids had mobiles over their bed with doggies, cows, cats, etc., but mine had landmarks of the world, like the Eiffel Tower, the Taj Mahal, etc., since my dad was already trying to sound out my prior incarnations. All I wanted was to be normal -- I remember telling the doctor who delivered me. But they wouldn't allow me.

Obviously, it was this doctor who contacted the government and said there was something unusual about me. The government no doubt asked him how he knew and he described for them some of our mature conversations. And the fact that I refused to be in the same room with a bunch of bawling kids. The hospital put a curtain up in my mom's room and brought in a desk so I could work at my studies.

The government dropped out of the picture for a number of years, probably to give me a chance to grow up, to see if I ever amounted to anything. And that's part of the reason I purposely cultivated the disposition of an underachiever, because I just wanted to be happy ... and left alone. But recently, I guess I got cocky and lost my reserve, thanks in large part to this blog and all the other things I write on the internet. I thought, No one reads this stuff, no one takes it seriously.

But it appears the government has agents who don't forget, so guess what, they're on my trail again. I started exploring some of the hits I've been getting on my posts -- they're reading me right now -- and for the most part, it was government computers. They're very devious, having googled my name. From there it was a matter of clicking the links. So they've seen my super intelligence on display, alas, and now they're on to me.

If I drop out of sight and you don't see me here, that's why. But if I can give them the slip, I will. Which could be hard to do. Being the center of the universe isn't easy. Fortunately, I've made some very in depth studies of spirituality, and have perfected the art of consciousness displacement, so I can literally pass for brain-dead, even more than usual. That's one way to fool them, but I have to work extra hard to keep my consciousness hidden in the room so I can come back if they start to embalm me. All you have to do is pop in, sit up, then pop back out, and that gives you a few days leeway while they try to figure out what's going on.

Anyway, if I submit to it, I know that's what's going to happen, they're going to extract scads of my DNA to build this race of supermen. It could be that copies of me will completely take over the world, and I don't want that. Because I think variety is the spice of life, plus I don't want to see myself coming and going. Since I'm very good at finding bargains at garage sales, I don't want to compete with every other me in the world. Plus, I have respect for other people's happiness. If they stop breeding because of me, there's a lot of guys who'll be very frustrated, and they might come lumbering up to my house like horny zombies.

What would a race of supermen made of me actually do for the world? I don't know how to fight, so we'd all be like Gomer Pyle, forever a private in basic training, five or six seasons. I'm not exactly a pacifist, but I'm more a pacifist than a warrior. Maybe that's it. If the whole world became a race of supermen made of me, there wouldn't be any fighting, no war, except fighting over bargains.
Posted by dbkundalini at 6:12 PM