Masturbananda -- The Problem Of Depressed Libidos 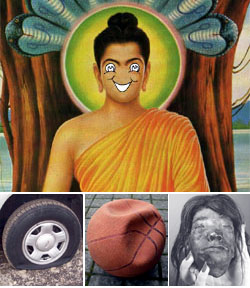 In the face of all modern problems, we look for guidance to our guru, Swami Sri Masturbananda.

Recently, he's found himself teaching more and more on the problem of depressed libidos, and how it's had a negative effect on people's drive to seek out experiences of the Divine. While it hasn't had a discernible impact on his closest followers -- those constantly at their devotions -- for many of us in the hinterlands, and certainly for society as a whole, it's been troublesome.

We've been reading of the phenomenon of many more married couples sleeping in separate bedrooms. That's what's reported. And while there's been little data on unmarried couples, because of the obvious shame involved, it is widely suspected that they too -- even they -- have been less sexually active. And what is most unbelievable is that even teenagers have essentially given up. They're now keeping their hands busy texting.

There was an interesting article recently in the New York Times on "The Sex Drive, Idling in Neutral." We will never forget the stunning lede, a woman saying she wished she could pay someone to have sex with her husband -- since she's no longer into it -- but apparently there have been no takers, presumably leaving him to seek out other interests and hobbies.

This is all quite distressing, but Sri Masturbananda is leading the way with his teaching. He recommends constant exercise, constant diligence in our devotions. We must not give up, we must press on, and overcome our depressed libidos, if indeed that is our problem. Those of us who have been faithful know he speaks the truth.

The swami likens depressed libidos to flat tires, deflated basketballs, and shrunken heads. If we're going to make a journey, and we want to get from Point A to Point B, of course we can't do that on a flat tire. To do so would eventually shred the rubber from the wheel and the noise of driving on the bare rims would make the kids cry all the time. In basketball, were they to use a deflated ball, imagine how it'd slow the game down. Every dribble would go splat, meaning every time they picked it back up, they'd be called for double dribbling.  And as for shrunken heads, there is some value to having a smaller head; it keeps your brain from clunking around; but by and large, we want to keep the extra space for possible expansion.

Sri Masturbananda calls on us to remember our closeness to God, or rather, God's closeness to us. The opening of the fellowship we can have is seen especially in ecstatic glimpses as we await the final consummation. In this, our guru's teaching is frequently to pull away, then pull away. Ever looking upward, while periodically looking down to check our progress, we are to seek out the bliss of the heights.

(For women, it is said there is a corollary experience. Our counsel to women is to guide themselves after their own lights.)

The truth is, depressed libidos take us farther from the Divine. Because every time we give up, it makes that much more distance between us. And since we are looking at millions of incarnations before most of us have the full possession of blissful fellowship, anything you can do to cut that down is to your benefit. As for me, the night's still young...

But let's say you're just not in the mood. Yes, of course, that goes along with what we've been saying. That's what Masturbananda's teaching on the subject is meant to address. Even with depressed libidos, we can heed the guru's call and remember the actual closeness of God, then bear down and work on it. And who knows, perhaps the beginnings of stimulation will provoke a genuine interest in you that will only build. Then you're closer and closer to those climactic glimpses of the Divine and you're much happier.

His teaching in essence is, Be your own best friend until you find your best friend, in the Divine.
Posted by dbkundalini at 8:39 PM