I Meet The Government's Top Shadow 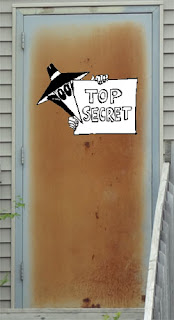 It might have been a bad idea for me to run the post, "The Government Is Keeping Track Of You." Just because it's true, and just because everyone knows it's true, doesn't mean they like us talking about it. With the constant surveillance I'm under, it only took them a week to track me down.

The next thing I knew they had a black bag over my head and I was going on the ride of my life, as they were going at least three miles per hour over the speed limit at all times. I had no idea where we were headed, except my innate sense of direction told me we headed for the northeast part of town, probably an old warehouse I know out there.

They were a friendly bunch, because they took the black bag off just long enough for me to catch a sporting glimpse of the door, giving me the chance to snap a picture of it with the micro camera I recently had embedded in my left eye. It was painful as hell, but I get some great shots, mostly cleavage you'd never get with an ordinary camera.

Inside, they put me through several metal detectors, extracted the last four digits of my "Social," and even managed to worm out of me my mother's maiden name, a matter of public record. The weirdest thing they did was frisk me for flashlights and searchlights. I was to find out why very shortly...

Naturally, I thought they'd haul me in front of a strange bureaucratic figure, a guy with a greasy curl on his forehead, rotating Chinese gong balls in his hand. But that wasn't it at all. Instead, this was nothing but a shadow sitting in a chair, occasionally shifting and moving the chair to let me know he was really there. He had a hat on the desk that he moved once in a while to let me know the chair shifting wasn't just an effect. I came to discern that his various movements expressed his moods: 1) Up and down, good terms; 2) Slammed down, upset; 3) Totally crushed and frisbee'd into the fireplace, more upset.

Of course he was saying things, asking me obscure questions about what I knew and how I knew it. I was sweating, going out of my mind about my possible offenses and whether they knew them all. I knew a polygraph test would sink me, a lie detector would be my end. Mentally, I ran over the full list making up my guilt. Good God, was it that bad? That time ... and that other time ... and, worse, the other time, very major. And that was just the harmless stuff.

He questioned and I was evasive. The hat went up and down. He continued, more persistently, but I refused his inquiries. He slammed the hat against the desk. He huffed and puffed and really questioned me, but I figured, this is the time to clam up. And there went the hat, with a puff of fire flaring up.

Maybe he had me, but maybe I had him. But my confidence was starting to drain away, because I had the thought, There's no way these guys are going to give up. With my confidence leaving, I felt a ton of paranoia settle on me. With a shadow in the chair, I couldn't be sure that other shadows in the room weren't conscious, even the ones my own legs made; they could be extensions of his, or leakages. He might have been full of shadow spores, being propagated left and right. I felt darkness coming over me, thanks to there being no real center to him.

Then it was nearly over, although I didn't know it at the time. He dropped the questioning and just chuckled. Then he spoke again, but now in "uhs" and "duhs" and "tut-tuts" -- verbal filler -- giving me very little to go on as I mentally searched for any kind of meaning.

Finally, we came to an understanding, that I wouldn't mention any of this to anyone, that I wouldn't write about it on my blog, etc. If I would agree to those simple terms, we would resume our stalemate. I agreed to his terms.
Posted by dbkundalini at 4:45 PM