I Will Provoke You 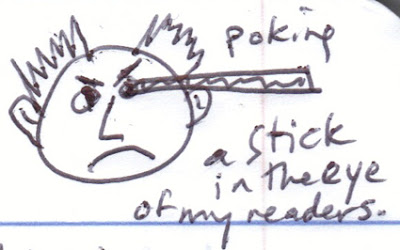 You scurrilous knave, you dare visit this blog? After I royally dress you down, I bet you won't again. You'll pick up your precious marbles and go home. Which is just fine by me.

There's lots of fish in the sea, as they say. And as for me, I have bigger fish to fry. I doubt I'll miss you all that much, although the way I picture it, you'll be seriously wondering what I might say about you next.

You might be wondering, What happened to his vaunted kindness to visitors, strangers? Yes, that's the attitude I typically show -- fat lot of good it's done me. What I get in return isn't worth having, not even a word of thanks -- it's all taken for granted.

So just slither away with your bad self, it'll be all right with me. Slither back under your lizard rock, burrow slightly in the sand to make room for yourself. Yourself and no one else. You're fundamentally a selfish person. That's your fortune today, my personal word to you. Looking out for Number 1, so typical, so tedious.

I'll still be here, hoping someone worthy of my time and talents visits me. In that rare instance, I'll roll out the red carpet. So rare, it's still rolled up from when I got it. I hope it still looks new. I haven't seen it since the day I got it.

Let's just say I'm pessimistic. There haven't been five visitors to this blog who've measured up to even the least of my standards. What has happened precisely to taint the run of average people, I don't know; it's enough to say they've fallen far from the standard I imagined possible. It's making me yawn.

By now I'm writing for myself alone. I'm the last worthy person in the world. You can leave. I'd prefer it that way. But feel free to class up your piece of s--- computer, that's probably very slow to boot up and so full of viruses, spam, and spyware, you couldn't get a passport for it. I'm not addressing a drawer of the sharpest knives.

OK, I feel a little sorry for you. Most people of your completely worthless character and stock are not themselves entirely to blame. The problems you're dealing with -- the dulled mentality, the slowness to respond, certainly the slowness to initiate anything of value, came before birth. Your parents were idiots, pressed together as first cousins, and already halfwits, in the forbidden bed. Your grandparents were off somewhere eating lead paint chips.

Then they announced your conception. But with the crossed eyes, no one knew precisely who they were talking to, so the whole world listened in. Then the world held its collective breath, knowing about garbage in, garbage out. The prenatal people crossed themselves. What they were expecting is the stuff of some horror movies, or clinical studies, like "The Feeble Minds of Arkansas," a booklet I used to have, until I sold it to some moron on eBay, apparently with a flicker of sense and wanting to examine his own psychological dregs, but guess what, he wasn't even from Arkansas!

Your gestation period was a disaster. Mom's water broke a month before birth, meaning you had a very dry time of it, chafing your hide in the absence of lubrication. They had to double grease her just to finally extract the infestation. By now you looked inhuman. Other children thought you looked like a gorilla. Several laws on infanticide were specifically rescinded by a Congress pressed into emergency session, but when they went to choke the life from you, you bit them and everyone got rabies.

Then you went home, where you've been causing a hideous odor ever since, plus a row a minute. The school wouldn't accept you. They wanted a priest to baptize you, but with one terrified look, he cursed God and died.

And now -- and I've always considered myself blessed, one of the luckiest people in the world, in addition to my treasures of merit -- you've come to my blog, publicly soiled yourself, embarrassed yourself (as though you're actually capable of it,) and offended me. I might have to delete my blog, with its enviable archives, just to destroy any record and shame of your visits -- that's how frantic I am.

You're very existence is a scandal to me. If I weren't afraid of languishing and suffering in prison needlessly, as might happen were I to draw a judge who didn't know your reputation, I might confront you myself with violence. With your dying breath, if the choking process triggered any kind of rationality in you, in the end you'd thank me.

No one gets in trouble when they excise a cancerous tumor. And it's thought praiseworthy to protect your family and society against a marauding bear. But you never can be too sure about our system of justice, since they eventually let out most criminals. Personally, I'd throw away the key and get on my knees and pray that the earth would open up and swallow the building.

"Yeah," you say. "But you ought to be glad someone -- even a scurve like me -- chooses to read your crummy blog. Obviously you're not getting that much traffic." To which I reply, and this is my final word on the subject, "Don't do me any favors, loser. Please don't."
Posted by dbkundalini at 4:39 PM