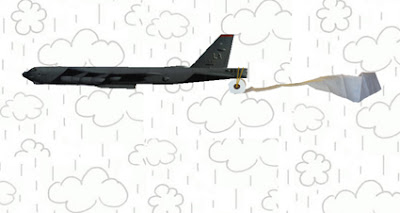 It's raining again and no one's doing a damned thing about it!

I mentioned that to someone, and they're all like, "What do you expect them to do about it?" Do something to get rid of it! Good grief, man, you're telling me that with our current level of scientific know-how -- we're able to look out at the beginning of the universe and, closer to home, sync an iPod in under a half hour -- that we can't do anything about the weather?

I remember they were talking about controlling the weather way back when I was a kid. What happened? Everything else they predicted came true: Putting a bean on a plate and having it blossom into a full meal; our own personal one-man helicopter; dial-up internet; and four slice toasters. Is weather the one thing they got wrong?

Maybe it's understandable that they screwed up weather control. Weather's really big, encompassing millions of acres at a time, spread out across the country like The Blob. We tried No Trespassing signs but that didn't do any good. The wind blew them all away and the rest of the weather never saw them. I personally like the idea of putting the weather in jail. Lock up a few jars of rainwater to set example for the rest. Or confine a few waves of a tsunami in a swimming pool and send a message, Quit messing with us!

The way I remember it, they were going to seed the clouds. Whatever happened to that? They were going to have big planeloads of men up there doing unspeakable things out the bomb bay. That's why they painted all the bathing beauties on the planes, a little encouragement. But it never did any good, except maybe for the men. Like I said, weather's just too big, and we don't have the men with the size to match. Anyway, seeding the clouds was meant to make it rain, not make it stop.

Of course we want rain. When the fields are struggling to choke down the dust, they need a drink. And there's other benefits of rain, I guess, like giving lifeguards a break. But we don't want endless quantities and oodles of rain spoiling everything, especially on our days off. People plan outside events for months, just to have them ruined by rain. I know today I was hoping to sit outside ... but nooooo.

The idea I've got is to send up millions of planes with millions of rolls of paper towels. Get them up in the sky and start soaking up the water before it falls. Then we'll have to think of what to do with the wet towels. Maybe drop them in big bins over lakes and wring them out with a big press and rollers and haul them away. It'd give the paper towel companies a great chance to test their claims, like "The Quicker Picker Upper" and "Our Towels Really Suck."
Posted by dbkundalini at 2:48 PM