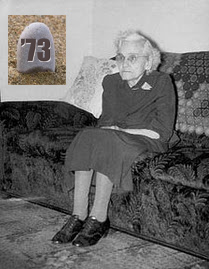 Note: The interesting news and admissions in this post have nothing to do with April Fool's Day. This is not a joke, no more than if it were April 2, which it will be tomorrow.

I'll stop and let that sink in.

She died. Now here's the interesting part: She died in 1973. How can this be? you may be wondering. Haven't I referred to her several times as though she were alive and still in her bedroom resting? Yes, I have. How I can completely escape the charges of being less than truthful -- a liar -- I don't know. I hope to just beg your pardon and figure that I've received it.

But is it simply the case that I am a liar? I'm not a Republican, so there must be some other explanation. I believe there is. Let's call it not wanting to accept her death, perhaps, then being caught up in an unending downward spiral of grief. I'm still mourning dogs from the late '50s, so it's not completely out of the question. Maybe only now am I ready to face the facts.

One fact still remains, that I'm still living in Grandma and Grandpa's house. You can see it on Google Earth, so that proves it's still here. You can see the half acre, the well, the maple tree, the whole business. I just wish I'd known when they were flying over, I would've gone out and waved.

To keep Grandma's memory alive, I've kept her room just as she left it, minus the personal hygiene receptacles that I did drain and clean shortly after her death. But now that I'm finally ready to accept her passing, I've decided (and already gotten to work on it) to remodel it as an alternate love nest for myself and the Pink Professor. I figure if it was good enough for my grandparents to have sex on the sly and bring forth five children, it's good enough for me.

Some of you have written in, being very close readers of this blog, asking about her. And a few of you have been concerned that I've been neglecting her by spending nights with the Pink Professor at his place. "Is anyone watching your grandmother? Helping her to the bathroom at night? Turning her so she doesn't get bedsores? Making sure she's well-hydrated?" These and other Nervous Nellie questions you've posed to me. I've been tempted to tell you off and to mind your own f)@#!^% business, but of course I don't want the health department knocking at my door, so I said I'd brought in a nurse from the Ratchet nursing service. The simple fact now that she's dead ought to ease your mind.

And here's something you might've forgotten: The picture of her above isn't even really her. Remember that? This is something I mentioned way back in my second post. Playing the part of Grandma Slump is Mother Kendall, which is what it says on the back of the original photograph, which I bought at an antique store in 2008. It was supposed to be $3.00, but somehow it was on sale for 50 cents. So I could've bought six grandmothers for the price of one, but I only needed one at the time.

This business of her being Mother Kendall, sometimes I think of that. Because Mother Kendall likely was someone's actual grandmother. Meaning there's people out there who might show up at this blog and go, "What's my grandmother doing on the internet?!" To those folks, I say, "So what are you doing with your grandmother's pictures in an antique store?" But I'd be nice, because I'd love to get additional pictures of Mother Kendall, since I'm completely attached to her by now.

Finally getting this out in the open is good for me. Because I've been concerned with continuity, and, really, the whole business of turning her, cleaning her up, checking for bedsores, changing her sheets, etc., would be very important. And it makes me feel guilty spending the night with the Pink Professor across town if I think people think I'm neglecting her back at home. See, I'm not. She's passed on, a little over two years ago, in 1973. At the ripe old age of 70, even though I've said she was 104. She was old enough to know better, but too old to die, if I sit here and think of how close I actually am to 70 (I'm still in my upper '50s).

Grandma's dead. I've finally said it. Now if I can only make myself accept it. ... There, I accept it.
Posted by dbkundalini at 10:40 AM