A Waste Of Time And Space 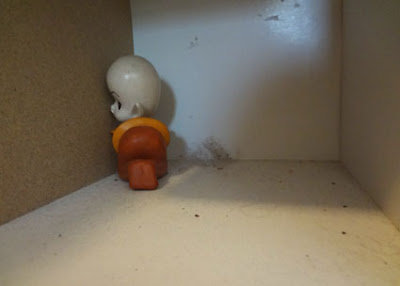 My blog avatar, Cutie Pie, is in a bad place. His self-esteem is at an all time low. He's off in the corner with the dust bunnies and dirt specks, refusing to be consoled. He's sad that the traffic at our blog has bottomed out -- I include him in the ownership of it since that usually makes him happy, even though I'm the only one who knows my letters. I'm a little bit sad about the collapse in visitors, but Cutie Pie's a whole lot sad.

What exactly is the problem, that's something of a mystery to both of us. I haven't even hinted to him that maybe my writing sucks. He's my biggest fan, and I'm my second biggest. All this time, I thought I was some kind of humor genius, that I had a lot of big laughs to share with the folks. That's the way it was way back in high school. When I was a kid. I could write stuff so funny they had to bring in oxygen tanks just to stabilize people so they could get them on a full ventilator. But times have changed, humor's moved on, and I guess I failed to keep up.

That's the most plausible explanation I can think of. That and the bad economy. People aren't even smiling, let alone laughing. They haven't got time for an old has-been like me, who, yes, had a good run way back when, but with the economy and the changing dynamics of humor, I've been left behind, left to shrivel and die, unwanted, without a friend in the world, a pathetic sight. 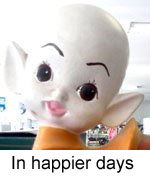 But I try to buck up his spirits. "April's not usually a good month for the blog, everyone's out for the first barbecue, students are in class, and in spring, that's when everyone's involved in pre-planning their funeral," I tell him. But soon it'll be May, then what?

I can see what's going on, everyone's literally moved on. You might not believe this, but when I had 150 friends on Twitter, I got three times the traffic. Now I have 3,000, and it's dropped that much. Why did I befriend so many marketing robots who don't actually read my tweets? Maybe more importantly, Where did the 150 I used to have go? Come back, ya schmucks! I'm dying here! My avatar's dying!

I honestly didn't see it coming. I figured we'd go from one victory to another, always getting bigger and better, until eventually I'd take over the world, then they'd be making collectible plates with Cutie Pie's picture right in the middle. T-shirts, souvenirs, coffee cups, etc., with his picture on them, and me getting the royalties. Instead, we're sitting in dusty corners, up against the wall, wondering what happened...

If I could regain your trust and patronage somehow, I swear I'd really buckle down and write better, write funnier stuff. A few fart jokes, maybe that'll bring the folks back. More pictures of funny cleavage, like fat men shaking their man boobs. There's a lot of people for that kind of low humor. But, alas, not that many for my high-brow, pun-laced, intellectual humor. To me, it's funny. But I'm educated, I'm not a dullard, I know what funny is. I wasn't raised by wolves or apes. I was raised by people who knew the value of a good laugh. They didn't scratch themselves during every meal and mate in public. They were discreet. You couldn't even hear them through the wall in their bedroom, that's how discreet they were. If I'd have been listening a little closer, and had made it known, I would've been an only child.

I confess, this isn't a new problem for the blog. The traffic's been down since the first of the year. But I've been doing the best with what I have, although you might say I've been winging it. Throwing out anything I think might stick. And, like Cutie Pie, I too have a sensitive spirit. So it's been very disheartening to see the whole thing go belly up. I've started thinking, maybe this is just a waste of time, maybe I personally am a waste of space. If I dropped off the face of the earth, no one would notice. That's literally true. Already, I walk through town, like downtown, and no one recognizes me, no one gives me high fives for my blog.

I've heard from folks, don't get me wrong, but it's mostly harsh criticism. A couple brazen critics took me to the woodshed for "wasting bandwidth." I frankly don't even know what that means. But if it means what I think it means, it seems irrelevant in this age when we've typically got at least 10 meg/second downloads and uploads. What's each blog post, like 1 meg total? How's that wasting bandwidth?

Well, apparently I've got it wrong, because when I've responded, they've told me the true situation, that there are bandwidth miners in the depths of the earth, and it's getting harder everyday for them to find new bandwidth. The world's running out. So if I waste even 1 meg, miners are down there dying for my sins at an astonishing rate. Like maybe three miners for every two posts, I don't know the rate. But they're leaving entire families behind, children who have nothing to eat, just because I'm vain enough to put my idiotic posts on the internet.

And you want to know something, I think I was happier without it. I was writing humor on bathroom walls, no one was dying, unless it was the guy who had to constantly scrub it off. And people would actually leave comments, unlike on the blog. I always got more comments and follow-ups doing graffiti than this, which is an odd fact. Still to this day, I miss that whole scene. For a while -- seriously -- I was going in with one of those portable scanners and preserving it all, because the cleaning guy would take away historic stuff. Now I write historic stuff, and it's lost on Google, it's lost in plain sight!

Anyway, that's my lament, that's Cutie Pie's lament. I'm sitting here typing my lament, while Cutie Pie's off in his corner, and it looks like a dust bunny has mounted him and is pumping away. Sex has changed since my parents' day: People, avatars, and dust bunnies don't care where they do it. It's a terrible sight, but what else has he got at this point?
Posted by dbkundalini at 7:56 PM