Put Me Over The Top 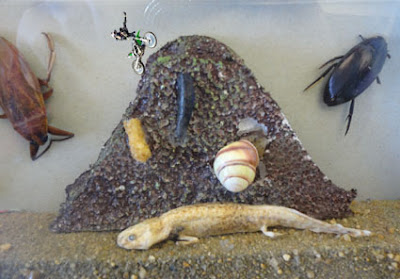 I've always got personal goals, a lot of stuff that probably doesn't matter in The Grand Scheme of Things, but it always matters right now.

It's been that way forever, now that I think of it. Like the personal goal of running faster than the other kids in 4th grade. That's one that doesn't matter much now, but it was a big deal back then. How about this, always trying to beat your time? I don't do much timing of myself because I don't want to have to be thinking about it the next time. But I just glanced at the clock, so I'll be thinking about it now.

What's the next mountain I need to climb, in a figurative sense? Will I make it over the top? And once I made it, will I just see higher mountains in my way? It seems scary. But it helps to have confidence that you can face whatever is out there. The past is prologue, and I've kicked ass so far, so to speak.

But that's Grand Scheme stuff. I've been thinking of the idea of putting me over the top in terms of trivial stuff. Like on Twitter. I see a lot of people, let's say they've got 590 followers, wanting that extra 10 to make it 600. Pretty trivial, especially when you consider what it's worth to have Twitter followers; I wouldn't say it's less than zero, but very close. Still, when you're close to a goal, oh, you want to be put over the top.

A thousand this, or two thousand, whether it's dollars or dimes, it's never enough, got to press on for more!

You know how money always evaporates? I think about that. Say I have a thousand dollars. You have to spend a hundred for something, that's 10% gone, a pretty good chunk. But if it's only a hundred gone, you're lucky, because it's more likely to be three hundred or more. If you're like me, it's the truth that your expenses always rise to match your income.

That's useful for mowing my lawn. Because I start thinking: This lawn is money, and I've just mowed 10% of it. It's a psychological trick that seems to make the job go faster, as I watch my "money" evaporate. Then, going along with the put me over the top theme, I'm thinking, I hope the gas doesn't run out, I don't want to have to stop and fill the tank, whatever's left, please put me over the top, let's get this job done!
Posted by dbkundalini at 7:07 PM