A Guy You Shouldn't Oughta Be 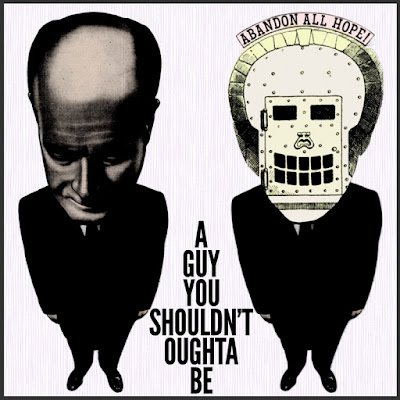 Of course, being a good boy is what they try to instill in you, to the point of making rules, constructing the mental fence, to confine you forever. But how well I remember real freedom, the glories of wearing suit pants to school with no underpants. No obstruction between you and your leg. It’s not like it’s going to hang out the bottom.

Naturally, now that we’re grown up and it’s truly considered normal to make a playground out of your body -- there’s a whole industry, sex toys, trapezes, belts, stimulant cream, celibacy cream, cages, traps, enlargers, weights and measures, molds for duplication, and dirty joke books -- you really never have to leave home! The critical consideration is how much you want these things present in your house. It means new shelving, nasty things on the coffee table, on your nightstand, or maybe hidden away, which is probably preferable so others not so lucky won’t feel jealous.

I can see how there’s some guys -- not morons but as smart as us -- who would forebear. At first you hear about them and you’re suspicious. But I say, “Give me 10 minutes in their house and I guarantee I’ll find their stash, hidden floorboards, wall safes behind pictures, etc., and I don’t care how tricky they are, hidden in fresh Jello or on the roof or down the chimney, it’s gotta be somewhere!" Then you come to realize, Yes, it might be rare, but there's guys out there, pent-up, out of their mind, their spirits a bit out of kilter, who truly do forbear.

Take this guy for example. Dick head, standing erect, acting out his condition, wearing his diagnosis on his sleeve. Look how sad he is. This is a guy that somebody led down the primrose path toward destruction. Not only did he take that path, he now embodies it. He’s sad, forlorn, stifled, depleted, and prickly, not in a good way. He’s dangerous. Like TNT (This No Touch), with a short fuse, even though he didn’t start out so depleted. But someone got to him, some hypocritical do-gooder going door to door talking about “sin,” then going back to their own home to a trapeze, where they hang upside down watching porn on an upside down TV, until eventually they blow it so hard it’s no trick to hit a floor target every time. Stupid pride.

Our main lesson for today is Don’t Fall For It. Yes, it sometimes helps you to reset if you take a break for a day, half a day, an hour, 3 minutes if you can manage it, just so you don’t make the break a way of life. Look at the guy again, standing erect but every inch of him depleted and dead to the world, his life and person a prison of his own making. With the testimony of his life now being, Abandon All Hope You Who Approach. If my warning is a lesson that you’ll heed, strip now and give me the equivalent of a four minute mile! Go for it! Faster, faster!
Posted by dbkundalini at 6:00 AM