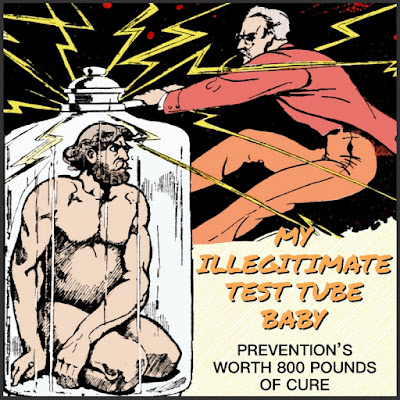 When thinking of the issues of procreation -- related to the god particle -- versus the dismissive act of self-abuse -- a little messier but more easily forgotten -- you occasionally need to keep in mind what you want for your life. Because the consequences of bringing new life into the world can be dire, including family vacations, photo albums, school and having to spring for lunch tickets, plus the constant whining, crying, whimpering, and bitching that you’ll find yourself doing.

Fortunately, I’ve kept these issues in mind all my life, ever since my cousins clearly laid them out for me, and I made sure I kept them in mind every Sadie Hawkins Day when girls had the right to propose to boys. I was always conveniently sick that day. And now that I’m old I’m reaping the benefits, being all alone, not a soul in the world caring for me, with most of the girls who potentially could’ve nailed me now living in nursing homes, tripping over IV tubes and spontaneously combusting. Any one of them would've been a massive financial drag on me. But life has been good. I wouldn’t trade it for anything, not even the biggest test tube baby in the world!

And I had my shot, too. There’s all kinds of things most people don’t know about me. Because I'm so used to being completely alone of course that means I'm fairly good at bridling my tongue. You think I blab a lot on this blog? That's nothing compared to the stuff I could tell. But I’ve crossed my heart and hoped to die so many times with every evil scientist you can think of, so I’ve kept relatively quiet.

But that also means I’m stoved up in many ways that to tell it all now would take us far beyond our current theme. Did you know even evil scientists occasionally die and can only be brought back a limited number of times? True. But the last time you bring them back they look at your blankly and you see a kind of sparking -- fitz, zipz, pitz -- their legs stiffen and for a few seconds it seems like they’re pedaling a bike, there’s a fresh stain on their pants, then they die. And all the artificial pulling and yanking you might do never brings them back.

The creation (or creature) in the jar is actually an artist’s rendering of an actual test tube or jar baby one of these scientists made. I used to have the research but used it over the years to clean fish on. So, dammit, it’s gone; the fish were really biting that year. But this guy had some way of combining human seed with you-name-it, exposing it to lightning and intense pressure, and always coming out with something. Which got confusing, like mixing the crotch of a near relative with a sleepy cow; he got the sex of a cousin and half dozen of the udders, which is two more than good nature allows.

The downside of creating any living creature -- whether a standard rugrat with a woman or a test tube baby in a storm -- is always the same. The expense and explaining it to your wife. And also registering the monstrosity! Our nosy government always wants to know where things came from and who they are. But if you stick to standard self-abuse, it’s no muss, no fuss. The government merely assumes you were celibate and if you weren’t they can’t prove it without untidy and expensive mucking about in your sewage complex.
Posted by dbkundalini at 6:00 AM