Another Day, Pace Yourself 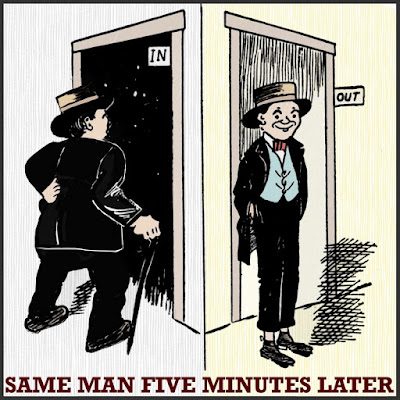 I guess most of us would agree, this looks like our usual 2 o'clock slump, the afternoon downer. 6 o'clock was a long time ago, top of the morning, leaving our system enough time to take on enough baggage to father an island. Where, by the way, every native dancing girl is happy to give her instinctual all in sync with the coconut trees waving seductively in the tropical breeze.

There’s not much you can do, if you can’t beat 'em, join 'em. But if they’re not here to join in, as in this sad struggle to walk through even the simplest of halls, then you have to beat 'em.

And what a look! From the looks of things, that’s one sad sack dude and a half. I hate to think that's how I'd look to others. Good for nothing, a painful halting gate, vastly bowlegged, maybe he’s been in a long meeting, everything's definitely crunched together in a sweaty morass that’s just crying out for attention: Feed me, a huge serving of stroganoff, anything but an empty plate.

Just like Superman ducking into an alley, our guy eyes a nearby bathroom. And with this kind of load -- his hips are dislocated from what started as a swagger -- he can be in and out in three shakes. There’s no line, no hint of turn-off bathroom smells wafting in the air, it’s truly a great place to clear your head, and definitely keeps him from being muscle bound; this won't take much exertion. A thing of beauty as it is, it’s the gift that keeps on giving. And it never asks much.

The "before" picture, though, looking at it closer is kind of painful. That guy’s old before his years. He’s bulky, square, and his suit no doubt stinks. He's a guy who’s forgotten the first imperative, take care of yourself, or he's put it off too long. And, naturally, there aren't any ladies lined up to do it, or guys for that matter, because let’s face it, the world’s a selfish bastard. And he's as good as anyone. It’s all basic equipment. They should be lined up to do the things that are socially called for. But the spirit of volunteerism isn’t what it used to be, back when people had families of 10. Now it’s every man for himself. And this restroom's as good as any.

I can happily report that when he emerges five minutes later, he’s a new man. With a new sheen and healthy glow about him, and all the confidence in the world. He’ll show the world! He thinks, “For the next few hours, I’ve got what it takes! I got a lot done here, and later I'll see what happens at home.”
Posted by dbkundalini at 6:00 AM