Great Granddad Had A Blast 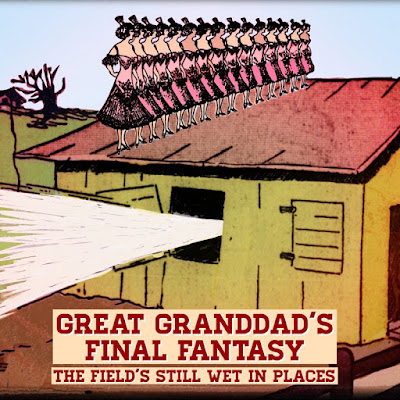 I would be a lot more interested in the past if the records were only there to consult. Who wouldn’t be? Just to know what was going on with Grandma and Grandpa and their parents and their parents -- humpa humpa -- all the way back to Sir Lancelot and the Seven Dwarfs, that’d be a great study.

But, alas, we’re not doing much better for those who come after us. It’s not like we’re making a spreadsheet of our own lives and passing it on to succeeding generations who themselves will be spread out over the sheets. I wish I would've done it, documented everything I've put out since my formative teen years. Instead, for most of us -- Grandpa included -- secretions were very secretive, and few tales are told of Grandpa in the field, Grandpa in the shed, Grandpa in the barn, Grandpa all over.

In a way we feel like "preseeding" generations had it over us. They lived in a world still in the grip of nature. Bulls in the field, rabbits in the pen, ducks laying eggs, cocks crowing in the morning, afternoon, and evening, their beaks grabbing and pulling the back of the hens’ heads -- humpa humpa -- nature at its craziest. It was a free-for-all but somehow every one of them was faithful to the task.

It’s probably normal that we try to see our forebears as basically gods in the flesh. With an all-seeing eye for the challenges they had to face, the Great Depression, Prohibition, then later the War, and best of all, the Sexual Revolution. They acted shocked, of course, but humpa humpa. Which is where they really bloomed and blossomed. They were so stoved up from bad times that when the Sexual Revolution launched it was all-out enthusiasm, even doing it in the road as the Beatles said. By then they had all the kids they'd ever have, so they were going at it for pleasure. Together, of course, but for an equally satisfying experience, alone. Self-abuse through the years. Mental humpa humpa.

They had the “need to breed” -- and it was crazy -- with mealtime often degenerating into a free-for-all of hands and relevant body parts, all without missing a bite, the potatoes being passed and consumed before they were cold, etc. You think synchronized swimming’s a talent, I wish I could describe my grandparents', aunts' and uncles', and even cousins' wanton behavior. The turkey wasn’t the same when they got through with it, strictly white meat, humpa humpa.

The first known libertine in the family was Great-Grandpa, whose reported fantasies of showgirls single-handedly kept the family fields fertile in the midst of the world’s worst drought. See picture.
Posted by dbkundalini at 6:00 AM