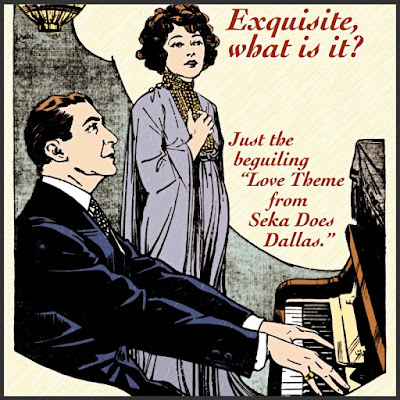 Rather than focusing on particular porn stars and their work -- and this is the same tact I’d take with great composers, famous politicians, amateur night strippers, and men of God who have been lured away by the flesh and having knuckled under have found themselves pulled deeper in the morass where that and the other fleeting allures of life have hooked them and left them floundering on the beaches of wasteland -- I’m taking a whole different approach. Bunching them together in the aggregate, and going as deeply as we can before our time and space is spent, should pay good dividends in the end. We will cover the territory, but lay bare the understandings that are their actual claim to fame, important and lasting legacies up the yin yang.

Of course I’m prone to conceal my own association with the industry, insofar as it exists -- I learned the facts of life from these flicks -- and ask with vulnerable supplication that no one pries any deeper than that to relieve your curiosity. (I believe all amateur films of my exploits -- which were messier than I'd like -- have been burnt.) Any appearances I may have made in any of the major films were literally no big deal, usually being incidental to the main action, one of the sidemen shunted aside in favor of the star.

But follow the bucks, that's often the main focus, the central approach in films of this magnitude. The sidemen are important and get important action, if it amounts to nothing more than to serve as a contrast to the more endowed star. The same happens in nature, an giant erupting volcano gets center stage, putting to apparent shame the smaller hills in their repose. But wait a few years and it's they who alone abide in majesty while the volcanic action, exciting for a brief moment, is gone, its glory cratered out, now a hole. The real life's now on the slopes. As to the stars, I won’t even guess what dysfunction they have when they find an actual significant other and have to limp along, the shaft a shadow of its former self. A crotch is a terrible thing to waste.

If you see it differently, let’s agree to disagree, but as for me I will keep things free and clear to perform their natural function alone, promising a better life. Think of how great it is to live and whatever you're doing, don’t do it again. Yes, with lust things can be bumpy depending on what’s going around. They say tomorrow never comes, yet we know the facts, it always arrives, and there awaits the pain. Playing the piano may be fine to a certain extent, your fingers lightly tinkling it, true for either black or white, but what may be fine for a concerto will not go well in the annals to be told.

Most music has its fans, whether it is "Seka Does Dallas" or "Kitty Does Earp." But once kitty does enough earping, that’s when you need figs to cover it, because that’s nasty business, not fit for man and we shall leave out beasts. Such an outcome renders complete disease in my members, from the brain down.
Posted by dbkundalini at 6:00 AM