Perfect Marriage: Do It Yourself 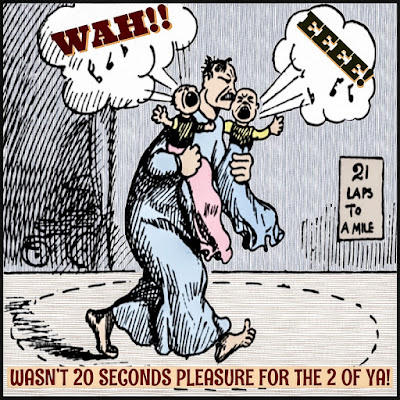 Here’s a man, a real brother, who can testify to the superiority of self-abuse over the same old tired been-done-to-death "sex act" as it’s often called, the whole disgusting "going all the way" method of "getting it on." Where, unless you’re hopped up on pills and bolted down with rubbers, or unfaithful to your wife with men, or with women while using an assumed name, switching license plates and never staying anywhere where anyone could ever identify you, and somehow being able to evade DNA detection from now till eternity, you’re better off playing Solitaire. By the way, they’ve made strides with Solitaire, which is now available for your phone, and you never need actual cards, if you have some lonely nights that you want to put to good use.

But, think, when things got hot and heavy this guy could’ve told his wife, “Hey, baby, instead of that I’m going to be staying tonight at a fancy hotel, just a little date with myself. Have a good night.” Then he'd buzz off to the famous Hotel d’Luster, all by himself taking the Family Wing. And just to remind himself of the stakes, he'd go one by one past the many rooms of the Suite. “This could’ve been Little Suzie’s room, this Little Dicky’s,” etc., going past nine or ten other rooms and listing the imaginary children he and the old lady would never have. Then back to the master bedroom, where he'd roost alone and roll in the hay by himself, canoodling. And play a little game with himself called "Shoot the Moon." Caution, it’s generally messy and these days the first thing hotel staff looks for are stains on the ceiling.

Oh yes, the things he could’ve done! But hindsight sometimes being better than foresight (a bigger crack for one), none of it happened. But if he had it to do again! As it turned out, in trying to tell her where he was going he got roped into taking her and then the whole family scene erupted. She wheedled, “We need one child so we'll have someone to leave our things to.” Which naturally had to be followed by, “We need two, so the first will have someone to grow up with.” That’s honestly all you need, max! But it’s easy to justify three, four, five, and so on. Because of what might happen to the first two, it always pays to have a few spares. A despicable woman!

Well, as you can see, the idiot agreed to the wife’s plan, reluctantly, and got two right away. She’s always harder to resist when she’s hanging on him and he can see the path down her nighty clearly, not marked with warning signs. So now here he is. Making a resolution for the next time they get together: "Baby, two’s good, who needs spares? We lose these, we do without!"
Posted by dbkundalini at 6:00 AM