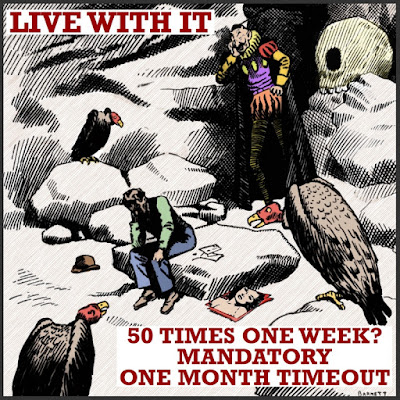 I just recognized a problem, a flaw in our series. I didn’t give the normally expected warnings about self-abuse, but just opened the floodgates and left everyone to their own devices. And a few of you have written in, thanking me for “liberating” them, “giving me the green light,” “releasing the pent-up hounds of my loins,” and so forth. But I also heard from Semenon, the god of male self-reproductive stuff, that in a few cases I have unwittingly been a bad influence. And for that I’m sorry.

Yet, even with the vast number of male readers I have, and virtually all of them frequently opening the spigots wide and free, so far we’ve only had one who’s been penalized and exiled for a time to Gusher Island. For the offense of self-abusing 50 times in one week. Which I should have thought of. If that were evenly spread over the week, it’d be -- find my calculator here -- yes, quite a few times a day, at least 50 times in a week. Well, that’s only a little over 7 times a day, that’s not so bad. Although if I would’ve remembered the rule I would’ve put up the warning, limit it strictly to 7.

And you never know, the guy might’ve done 100 and it just took time for the powers that be to catch up with him. But now I’ve warned you I’m sure you’ll be fine. But if you are taken, look at the conditions on the island. Barren rocks, no chair, an enforcement devil, a huge skull (maybe King Dong whom mythology tells us inseminated the primal world then died), a porn magazine, and a healthy population of vultures or buzzards just waiting for you to pull it out. What do they do if you do? Well, they've got sharp beaks, their mouths are open, which might be clue.

It’s a terrible thing he had to go there. He committed spermicide and it’s partly my fault. But I vow that when he gets back, I will use some of the money I made this month from a particular planning for parenthood organization for helping lighten the load for them and a lot of guys, to go see him. Not only am I interested in Gusher Island -- I’d like to know if it’s worth the risk -- but I’d like to publicize his personal story and see if we could perhaps get him a partnership with sperm banks and maybe supplement his income by the notoriety. No, we don’t want every other child fathered by him, but 20% isn’t unreasonable. Each with strong wrists, we’d be winning the Olympic gold in lots of acrobatic categories.

But now he’s confined. Sidelined. Pulled over. Wearing one of those plastic Willy-B-Gones (cage) with a padlock -- kinky fun, guys. Adult diapers for incidental dripping. Bruises on his bottom from the rocks. Other discomforts. The enforcement devil expects certain favors and has terrible breath. Be warned.
Posted by dbkundalini at 6:00 AM