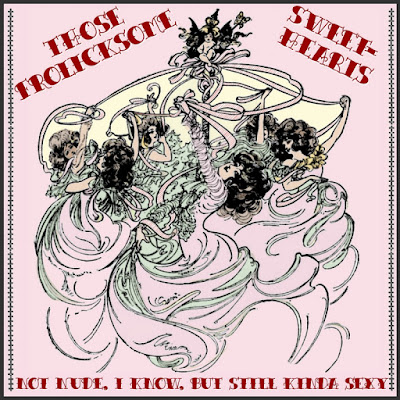 This one's for a particular group of you guys and you know who you are. Nothing’s ever for everyone, because of course kink’s a focused commodity. The market hath spoken, We’re micro-targeting this or that particular nerd nugget of reverie and merriment! So I gotta join 'em! The more the merrier, you know, but we’re disparate in our desperation. Even complete nudity isn’t the standard currency -- big duh, I know, it's so boring. But you could have someone bound head to toe in girdles and make more money (in places) than the whole boring display, splat, right in your face.

How do I know all these things? The less said the better. Mostly window peeking, coast to coast. Wyoming's particularly kinky, but the houses are all 600 miles apart. Also I’ve mastered the skills (this took two years in shaman's camp) of hypnotic bird warbling to put people in involuntary trances. (I say involuntary but they’ve never been happier.) Anyway, regardless whether you disagree or not -- and one of my kink triggers is having people disagree with me -- that’s life. A guy has his rounds, a guy makes his rounds, and that’s it. Right now I’m trying to rush-write this post because I have an appointment with a guy who likes being forced to clip his toenails. Doesn't sound like much? They're rusty clippers!

Anyway, our pink dancing girls in this ultimate beautiful circle dance of ribbons and sunshine magically appearing on bright mornings, so innocent, don’t have a clue what they’re up against. Or maybe they do, [rubbing hands] so much the better! They go by, a pink blur, although I have some focusing skills. It’s even a good mental challenge. Say you have five or six identical things, how long can you continue to isolate one particular thing. Then they think they’ve obscured your thought in their blur, in the mystery, and present themselves for the selection process. How surprised they are when you make your selection in a split second and seem to know what you’re doing. You, you, you.

Of course there’s no force here, and I’m a perfectly sweet guy, treasuring one and all (within limits) -- whether you wear bright pink or sun-like yellow. It’s charming to call each one by name, first, middle, last name initial, then manifest an intuitive knowledge discerned right there on the spot of each one’s favorite color, quotation, political party, movie, etc. Now it’s time for the first cut, which, alas, is based on political party. If she's Republican I’m so nauseated I can barely stand, but stand I do until she's safely out the door and blacklisted for the future. There’s no greater buzz kill. Hate to get political, but these days it's life and death. No bigger depressant for my normally rigid libido.
Posted by dbkundalini at 6:00 AM